Much Ado About December

No, as far as I know, no one is putting on "Much Ado About Nothing." It's just that there's always so much to see and do in December, as so many organizations put on holiday shows.

Chris Jones, theater critic at the Chicago Tribune, has put together a list of the top 10 Christmas show options in Chicago. I thought I'd include that here, since so many people make trips to the city to do their Christmas shopping or look at the department store windows. Jones has included the Goodman Theatre's annual "Christmas Carol," which he found extra-specially good this year, as well as "A Christmas Story: The Musical" at the Chicago Theatre, a new show based on the film favorite that is headed for New York next Christmas, Alan Ayckbourn's dysfunctional family comedy "Seasons Greetings" at Northlight, and "The Christmas Schooner" at the Mercury Theatre, in which Jones loved the cast and said that the performers "take charge and make a show pulse with life and heart."

Back here at home, you can start your December by heading over to Heartland Theatre to catch Anton Chekhov's "The Three Sisters," with a marvelous cast of ISU graduate students in acting augmented by Henry Woronicz (a world-class actor and head of that graduate acting program at ISU), Ann White, Dave Krostal and Dean White from Heartland productions past, and an actor named Lee Childers I personally haven't seen on local stages who is a most welcome addition. It's a wonderfully warm, sad production directed by ISU professor Sandi Zielinski. No, there's no Christmas celebration in "The Three Sisters," but we're talking Russia here, so there's a definite chill in the air. "The Three Sisters" officially opens tonight, with performances through the Sunday Matinee at 2 pm. 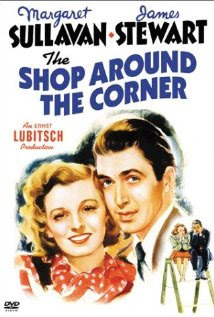 One of my favorite movies, holiday or otherwise, comes to the Normal Theater on Saturday and Sunday. That would be "The Shop Around the Corner," director Ernst Lubitsch's lighter-than-air confection about two clerks at a small store who can't stand each other in person, but fall in love by letter as anonymous pen pals. Jimmy Stewart and Margaret Sullavan are lovely as the boy and girl, and Samson Raphaelson's screenplay is a charmer. You may recognize the secret-pen-pals/love-by-letter plot in "The Shop Around the Corner" from its other iterations. It all started with a play called "Parfumerie," by Miklós László, which has been turned into "The Shop Around the Corner," "In the Good Old Summertime" and "You've Got Mail," as well as the musical "She Loves Me." I guess when you have a good thing going...

After "Shop," the Normal Theater keeps the holiday spirit going with wall-to-wall Christmas movies, showing perennial favorite "White Christmas" on the 8th and 9th, the more irreverent "National Lampoon's Christmas Vacation" on the 15th and 16th, "A Christmas Story," complete with Red Ryder BB gun and leg lamp, on the 17th and 18th, and finishing up with Frank Capra's sentimental "What if you were never born?" tale, "It's a Wonderful Life," from December 23 to 25.

Less Christmasy (and with a completely different mood than Chekhov, Lubitsch, Bing Crosby or Frank Capra): "Murder at the Howard Johnson's" at Community Players, playing as part of their Lab Theatre program. "Murder at the Howard Johnson's" is exactly what its title promises, although I don't think the murder ever comes off. It's more like "Plaza Suite" by way of "Clue," with a farcical tone underlining a love triangle with murderous intent. In the three scenes of the play, two sides of the triangle keep conspiring to knock the other one off. The key is that the alliances and targets keep shifting. I saw the plays years ago, and I don't think I will ever get that trademark orange-and-turquoise color scheme out of my head.

In Urbana, the Station Theatre opens its new adaptation of Willa Cather's "My Antonia" tonight, as well. Celebration Company member Jarrett Dapier has adapted the novel for the stage, with Gary Ambler and Joi Hoffsommer directing. Performances of "My Antonia" run from December 1-4, 7-11 and 14-17, with all shows at 8 pm and ticket prices ranging from $10-15.

The annual Holiday Spectacular comes to the Bloomington Center for the Performing Arts December 9-11, with its usual large cast (over 300?) and tuneful tidings of good cheer. Once again, it features a script written by Nancy Steele Brokaw and is directed by Lori Adams. New this year is a Facebook page devoted to the Holiday Spectacular, where you can get up-to-the-minute updates. Tickets are $23 for adults or $11 for those 13 and under. Group discounts are also available.

A movie that Oscar-watchers have been waiting for, "The Descendants," starring George Clooney as a wealthy man in Hawaii trying to reconnect with his daughters and figure out what happened to his marriage, comes to Champaign's Art Theatre starting December 9, followed by that rare commodity, a Christmas horror movie. This one is "Rare Exports," about which Roger Ebert said: "This is a superior horror film, a spot-on parody of movies about dead beings brought back to life."

For more traditional holiday offerings, try C-U's Krannert Center for the Performing Arts, where there is a "Nutcracker," performed by the Champaign-Urbana Ballet Company and Sinfonia da Camera, from December 2-4, a Carol Concert on the 4th, and "Sleigh Bells Ring," a concert from the Champaign-Urbana Symphony Orchestra with special guests The Chorale, led by Julie Beyler, and the Parkland Singers, led by Barbara Zachow, on December 8th.

Happy holidays!
Posted by JulieK at 9:23 AM