Illinois Wesleyan's School of Theatre Arts has been named Broadway World's Spotlight School of the Week. The article linked at broadwayworld.com notes success stories William Duell, Richard Jenkins, James Sutorius, Alison Vesely, Larry Neumann Jr., Lisa Marie Gigante D'Amico, Nic Diamond and Mary Heaton Carrick, all of whom emerged from IWU's theater program, but did not mention the alum currently appearing on Broadway -- Lisa Karlin, appearing in "The Addams Family" -- or the two who'll be there soon. The latter group includes Bryonha Marie Parham in "Porgy and Bess," opening at the Richard Rodgers Theatre on December 17, and Evan Kasprzak in "Newsies," which will open next March at the Nederlander Theatre. Congratulations, IWU Theatre! You can peruse pictures of proud IWU alums here.

The Station Theater in Urbana has informed us that its current production of "My Antonia," adapted from the Willa Cather novel by Jarrett Dapier, is not Dapier's first adaptation for the stage. According to a Facebook post from the Celebration Company, Dapier once wrote an adaptation of a Chris Crutcher novel called "The Sledding Hill," with Crutcher himself attending a performance. I can promise that Willa Cather will not be in attendance at "My Antonia," but you can be. Ticket information here.

Heartland Theatre annual 10-Minute Play contest is well underway, with entries coming in fast and furious. Remember that your play (which must be on the theme "Playing Games") is eligible for revisions if it gets in before January 1. The final deadline is February 1, 2012 for all entries.

Heartland has also announced that auditions for its upcoming productions, Theresa Rebeck's "Mauritius" and Tracy Letts' "Superior Donuts," are coming up soon. The "Superior Donuts" audition schedule is already posted here. (Note that the auditions page currently erroneously says that performances are in September when "Superior Donuts" is really scheduled for April 12-29.) "Mauritius" details should be forthcoming any day, now that director Sandi Zielinski has completed her work on the ISU MFA showcase production of "Three Sisters."

Speaking of auditions... IWU has finished auditions and announced casting for their winter and spring performances. That includes Chase Miller as Tartuffe in "Tartuffe," Kirsten Anderson, Lizzie Rainville, Annie Simpson, Allison Sutton and Laura Williams playing five of the first women to trod the boards in Restoration England in "Playhouse Creatures," and Will Henke and Isaac Sherman as prisoners 105 and 106 in Maria Irene Fornes' "Promenade."

ISU is in the midst of its own winter/spring auditions, with callbacks happening for Sarah Ruhl's "Passion Play," Caryl Churchill's "Cloud 9," William Inge's "Picnic," Shakespeare's "Julius Caesar," and "La Boheme," the Puccini opera that spawned "Rent." Good luck and congrats to all those called back. (Tickets to all of those shows, as well as ISU's spring dance, symphony and choral concerts, are available at Ticketmaster if you want a jump on the best seats.)

In other news (or if you like to keep track of these things, which I do), you might be interested to hear that the Kennedy Center Honorees for 2011 are Barbara Cook, Neil Diamond, Sonny Rollins, Meryl Streep and Yo-Yo Ma. The gala at which they are celebrated has already been taped and will be broadcast on CBS on Tuesday, December 27, 2011 at 9 pm Eastern/8 Central. I'm thrilled I got to see Barbara Cook in person last year in "Sondheim on Sondheim" and am probably the most excited about her being honored.

In book news (or really coin news), Britain's Royal Mint has announced a Charles Dickens commemorative coin to honor the 200th anniversary of his birth. "The £2 coin...boasts a remarkable and inventive reverse design by Matthew Dent. A profile outline, immediately recognisable as Dickens has been painstakingly created from the titles of Dickens’ famous works," the Mint tells us. It really is cool to see Dickens' head created out of his titles, all fitting onto a £2 coin, even if it does look a bit like a map of South America. (See below.) If you look closely, "CAROL" and "COPPERFIELD" will pop out. I'm still looking for my own favorite, "Nicholas Nickleby." There is also a local connection to this story, since ISU's Milner Library's Special Collections Department has some nifty Dickens items. 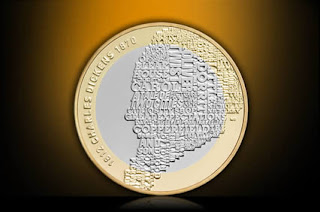