Christmas Wishes Come True in "A Christmas Story, the Musical!" 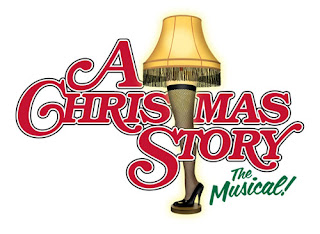 Although I think I've only seen it twice, Jean Shepherd's "A Christmas Story" movie always lands at the top of the major "Best Holiday Movies" list. And TNT runs marathons of it every year at Christmas time. (My second viewing of the movie was yesterday, during that marathon.)

This sweet, affectionate, slightly irreverent look back at one boy's Christmas in the 1930s, fixating on the "Red Ryder BB gun with a compass in the stock, and this thing which tells time" that little Ralphie wants for Christmas, strikes a chord for a lot of people. It may be the "remember when" aspect of many of its scenes, the familiarity of the schoolroom and bullies and snowpants bits, or just the innocence of the boy who keeps coming up with new schemes to convince his parents he needs that BB gun. Whatever the reason, this is one movie that resonates.

An adaptation of "A Christmas Story" for the stage has been around since 2000, with attempts to put together a musical version since about 2006, with a reading in New York and a "world premiere" in Kansas City in 2009. This year, the producers (including Peter Billingsley, who played Ralphie in the movie) decided they had the show in the shape they wanted, and they started a five-city tour that hit Chicago in late November. "A Christmas Story, the Musical!" is now playing the historic Chicago Theatre on State Street, a block away from the Macy's that used to be the Marshall Field's that figured in a lot of Chicagoland kids' own Christmas dreams.

According to the website for that musical, the plot of "A Christmas Story" comes from Jean Shepherd's published stories, radio broadcasts and public appearances in the 60s. Shepherd steps in as narrator for the movie, too, lending his charming, folksy voice to the proceedings. On stage, the musical version is lucky to have Chicago veteran Gene Weygandt in the role, and he adds a great deal of credibility and warmth to the proceedings. When he gets a catch in his throat near the end, you can hear a collective sniff throughout the audience, as well.

The show is a bit different for a big musical, in that so much of the burden of the show falls on kids, and especially on Ralphie, played with energy and enthusiasm by Clarke Hallum. The kid is terrific, carrying the show with singing and dancing and acting from curtain to curtain.

Others in the cast who acquit themselves well include John Bolton as Ralphie's dad (always referred to as "The Old Man"); Rachel Bay Jones as his very sweet but kind of dim mother; Matthew Lewis as his little brother, trapped in a snow-suit like the Michelin Man; Adam Pelty as a testy Santa Claus; and J.D. Rodriguez, understudy for the role of Flick, taking on the role without losing a beat (or a tongue).

With a book by Joseph Robinette and music and lyrics by Benj Pasek and Justin Paul, "A Christmas Story, the Musical!" comes off energetic and cheery, hitting on all the familiar anecdotes from the movie, and crammed full of bright, pop tunes that bring to mind the Maltby & Shire oeuvre in shows like "Big."

The choice of scenes seems like a no-brainer. Seriously, how could they have avoided including those much-beloved vignettes (like the leg lamp, the tongue frozen to the flagpole, the essay for school, the flat tire, the dogs next door...) without fans of the movie getting up in arms? And director John Rando's staging of most of them is creative and effective, with smoothly moving scenery, fun effects and both an awesome Visit to Santa and a Night Before Christmas that work like a charm.

As for the score, the songs are melodic (I especially liked the tune of "Ralphie to the Rescue") and cute, although having so many extended production numbers gives the show a somewhat labored feel as it wears on. The Leg Lamp kickline is hilarious and Ralphie's fantasy of being a cowboy hero is also amusing, but both went on too long for me. And I could've done without the Wicked Witch number for Ralphie's teacher, Miss Shields, even though you knew it was coming, both because it's in the movie and because Broadway star Karen Mason is playing Miss Shields.

There are rumors that the producers would like to get a berth for the show on Broadway next Christmas, and if so, they'll surely be looking for changes. So that's my suggestion -- trim a chorus or two in the longer numbers and cut Miss Shields' Wizard of Oz number entirely. I'd probably also cut the icky linguistic stereotypes during the family's visit to a Chinese restaurant. Yes, they're in the movie, but no, we don't need them now.

All in all, "A Christmas Story, the Musical!" (it cracks me up every time I type that exclamation point) is what it needs to be -- a faithful recreation of the movie featuring sharp, sunny performances, fizzy songs, an emphasis on heart and home, and a very nice memorial to Jean Shepherd.