"The Apartment" Rings in the New Year at the Normal Theater 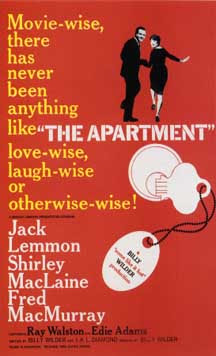 I told you a lot about "The Apartment," the second movie in the Normal Theater's mini-Bily Wilder tribute, when I reviewed the Broadway musical "Promises, Promises" back in 2010.

"'The Apartment' is very cynical about life in the 60s and the accompanying sexual and corporate politics," I wrote then, "what with the basic plotline about an everyman office drone named C.C. Baxter ... who aspires to rise through the ranks at Consolidated Insurance. The only way for him to do that is to let a fleet of higher-ups use his apartment for their extra-marital trysts. Yes, C.C. is complicit in their dirty deeds, but he's not exactly happy about it. And he also spends a lot of time on park benches in the snow while other people enjoy his apartment, plus the girl he yearns for, an elevator operator named Fran Kubelik ... keeps ignoring his affections.

I also noted that there is a fun piece of trivia in the movie: "...that the creepy execs in 'The Apartment' include 'My Favorite Martian' Ray Walston, David Lewis, AKA the original Edward Quartermaine on 'General Hospital,' and David White, who played Larry Tate, Darren's advertising agency boss on 'Bewitched.'"

Yes, I was just talking about Ray Walston a day or two ago, with reference to "Kiss Me, Stupid," and how I wished the leading man had been Jack Lemmon instead of Ray Walston. And there they are in "The Apartment," the earlier, better Billy Wilder pic, both turning in better performances than anything in "Kiss Me, Stupid."

There are a lot of things to love about "The Apartment," including the apartment itself. It's sort of an alter ego for C.C. Baxter, the comfy, a little scruffy, well-meaning nice guy who lets himself get pushed around in the name of being a loyal employee. He doesn't live in a palace, he sings opera while draining spaghetti noodles with a tennis racket, and he has a very tender heart. He and Fran are both charming misfits, brought to wonderful life by I.A.L. Diamond's and Billy Wilder's smart script, Wilder's sharp direction, and Jack Lemmon's and Shirley MacLaine's adorable, vivid performances.

Maybe it's because the movie's heart is so often on its sleeve (or on Jack Lemmon's face) or maybe because the characters are written deeply enough that they stay sympathetic, even when making terrible choices. Whatever the reason, it's easy to stick with "The Apartment," to root for C.C. and Fran, and to hiss at the villains.

Speaking of the villains... It's amusing to me that Fred MacMurray could change his stripes so completely and be none the worse for it. "The Apartment" was released on September 16, 1960, with him as the slimy heel of a boss, and then he showed up as the quintessential great dad in "My Three Sons," which premiered on TV September 29, 1960. To me (and to a million other Boomers, I imagine) he was the "My Three Sons"/Flubber/"Happiest Millionaire" guy. It wasn't until I discovered the Late, Late Show that I found out about "The Apartment" and "Double Indemnity." The point is that he did what he needed to do with Jeff Sheldrake in "The Apartment" to make the whole plot work, to make it seem reasonable that a girl like Fran (and Edie Adams' Miss Olsen) would fall for his lines, and that a schnook like C.C. would give up his apartment to get good marks from a boss like that. He's handsome, genial... And an absolute snake. Kudos, Fred MacMurray.

"The Apartment" was nominated for ten Academy Awards, and it took home five of them, including Best Picture, Best Director and Best Screenplay. It deserves every one.

And what a great idea for the Normal Theater to screen it on New Year's Eve. It's the perfect fit.
Posted by JulieK at 3:13 PM