TimeLine's Blog Offers "A Pitman's Guide to the Art Institute" 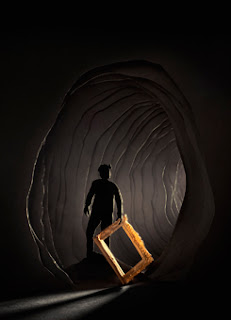 "The Pitmen Painters," a play by Lee Hall (the "Billy Elliot" Lee Hall, not the local sportscaster) wowed audiences in Newcastle-upon-Tyne, where it started, and then in London at the National Theatre, on Broadway and in a Chicago production at TimeLine Theatre, which has extended its own "Pitmen" run to December 18.

"The Pitmen Painters" is a lovely play, inspired by a book by William Feaver, about bringing art into the lives of a bunch of miners who toiled in Northern England in the 1930s. In the story as told by the play, these men (who work down in the pit, hence the "pitmen" moniker) gather for an art appreciation class with a visiting teacher, but quickly find the class boring and disconnected to their lives. To learn more about what art can mean to them, uneducated, regular old folks, they begin to paint themselves. And they earn a measure of success at it, too. For awhile. It's a funny, sharp, engaging piece of drama, about who has the right to make or own art, what it takes to sell and/or sell out, how to judge talent, and whether making and becoming involved in art can change lives, whether you're any good at it or not.

TimeLine's production, directed by B.J. Jones, just made the Tribune's Chris Jones' "runner up" list for the best productions of the year, and it has been very well reviewed as well as popular. (Note the extended run.) About the show, Jones wrote, "B.J. Jones' earnest, moving and unpretentious production will, I suspect, be a very big hit for this savvy and growing company, where more and more Chicagoans have come, with reason, to trust the power, truth and integrity of the work. Hedy Weiss, at the Sun-Times, was equally complimentary: "[D]irector BJ Jones and his spot-on cast sweep their powerful brushstrokes right across your heart."

I'm writing about the show now for two reasons. 1) You still have the opportunity to catch the show before it closes on the 18th. 2) Dramaturg Maren Robinson has just blogged about an utterly fascinating trip to Chicago's Art Institute to try to find artworks and paintings that might've inspired or affected the Ashlington Group, the real painters in the play.

What a cool idea! Robinson and TimeLine Marketing Director Lara Goetsch found a Gainsborough, a Turner, several Van Goghs and Cezannes, a Henry Moore sculpture, some Picassos and a little Mondrian. As Robinson concludes, "It was a great reminder of the embarrassment of artistic riches the city has to offer." As well as a perfect companion to "The Pitmen Painters."

You can read Robinson's TimeLine blog here, watch a video snippet of the play here, or find ticket information here.
Posted by JulieK at 4:21 PM