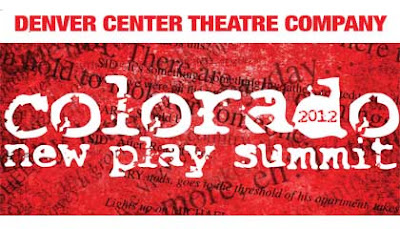 Also in my in-box this morning... The Colorado New Play Summit, a festival organized by the Denver Center Theatre Company and Artistic Director Kent Thompson, would love for you to attend February 10 through 12, 2012. (Yes, it ends on 02-12-12, in case you're keeping track.)

The Colorado New Play Summit is a three-day festival at the Denver Center for the Performing Arts, including two fully-produced world premiere productions, five readings of new American plays and a "playwrights slam," which offers excerpts from works in progress.

The world premieres this year (with descriptions from New Play Summit materials) are:

The Whale
by Samuel D. Hunter

Charlie hasn't seen his ex-wife or daughter in 17 years and has grown dangerously obese since his partner's death. In failing health, Charlie fends of family, friends and church as he doggedly tries to connect with his estranged daughter in this emotional story.

Two Things You Don't Talk About at Dinner
by Lisa Loomer

Myriam's annual Passover Seder, a multicultural mix of family and friends, threatens to explode as politics and religion hijack the conversation, severely testing the ties that bind. Is peace not possible -- even at the dinner table?

And the five readings will include a musical version of "Jane Austen," with book and lyrics by Jeffrey Haddow and music by Neal Hampton; "Ed, Downloaded," by Michael Mitnick, about a man who has chosen to have his brain stored on a disc (or maybe a zip drive?) before he dies; "The Hand of God," a new comedy about reality TV by Richard Dresser; another Lisa Loomer play, this one a slice of street life called "Homefree" that involves kids trying to survive in a hostile world; and "Grace, of the art of Climbing," a rock-climbing play by Lauren Feldman.

For more information, click here or here. To register, click here. Full Summit passes include guaranteed seating at all readings and admission to the two world premieres, as well as meals, receptions, and discounts to nearby downtown Denver hotels.

If you are a member of the American Theater Critics Association, which is holding its winter conference in conjunction with the Summit, you should register through the association for a special rate.
Posted by JulieK at 11:10 AM