Holiday Movies: My First Look at "It Happened on 5th Avenue" 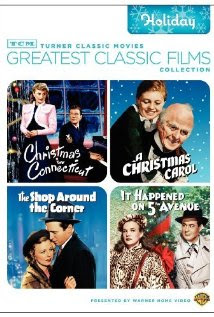 I wanted my own copies of "Christmas in Connecticut" and "The Shop Around the Corner," so it only made sense to buy the Turner Classic Movies collection you see at left, that combines those two classics with one of the many film versions of Charles Dickens' "A Christmas Carol" (this one is the Reginald Owen vehicle from 1938) and a film I hadn't heard of, "It Happened on 5th Avenue," a post-WW II Christmas story involving ex-GIs who can't find anything to do or anywhere to live.

It's a very intriguing film, one that I don't believe showed up on Chicagoland Late, Late Shows or Dialing for Dollars. If the IMDB comments are to be believed, it was broadcast every December in Tampa, Florida, however, and for some Floridians, it's their favorite Christmas movie ever. It's definitely sweet, definitely has a message, with its story of haves and have-nots all living and working together to figure out what's truly important (Hint: It's not money), and features one of Hollywood's best character actors in Charles Ruggles, who plays the rich robber baron whose selfishness has made him a prisoner of his own wealth. Ruggles' character, Michael J. O'Connor, owns the palace on 5th Avenue which has been invaded by a gentlemanly hobo named Aloysius T. McKeever, played by veteran comic Victor Moore. Although he had some amazing credits on his resume (including originating the role of Vice President Throttlebottom on Broadway in "Of Thee I Sing"), I find Moore to be an acquired taste, one which I have not acquired. He is more palatable here, acting all charming and scruffy, with nice interaction with an equally charming dog. I don't see a credit for the dog, but he (or she) was excellent in the role and certainly made Moore more appealing.

After McKeever has made his seasonal return to the O'Connor mansion, he runs into out-of-work ex-GI Jim Bullock, played by Don DeFore, someone I know best from the old TV show "Hazel," where he played the boss. DeFore is a bit of a lightweight as the romantic hero in the piece, but he does all right. I was more impressed with Gale Storm, playing rich girl Trudy O'Connor, who pretends to be poor and on the lam so she can stay in her own house and not evict interlopers McKeever and Bullock. I knew her name, but I don't believe I've ever seen her in anything except maybe a guest role on the likes of "The Love Boat." Here, as a leading lady, Storm is pretty and perky and everything she needs to be.

Still, it's Charles Ruggles who keeps stealing scenes. He's just adorable, even if his O'Connor is a nasty old robber baron. His estranged wife, who also shows up in disguise at the (increasingly crowded) mansion on 5th Avenue, is played by the lovely Ann Harding, best known as a heroine in five-hanky dramas in the early 30s. It's nice to see Harding kick up her heels in comedy, especially opposite Ruggles.

"Gilligan's Island" fans may also enjoy seeing the Skipper, Alan Hale, Jr., in a smaller role as one of Bullock's army pals.

For me, it's fun to gawk at the lavish mansion and see what 5th Avenue in New York looked like in 1947, and also to see costumes and hairdos which look so much like what my mother wore in pictures from that era.

"It Happened on 5th Avenue" is definitely worth a look as more unfamiliar holiday fare and Life in America post-World War II. The fact that it is included in the same package as "Christmas in Connecticut" and "The Shop Around the Corner" is just icing on the cake.

Trivia note: Ann Harding played Linda Seton in the first filmed version of Philip Barry's play "Holiday." The second "Holiday," the one with Katharine Hepburn as Linda Seton, is what I usually pick as my favorite movie of all time. And that "Holiday" took place in a mansion that looks very much like the one in "It Happened on 5th Avenue." I can find nothing to suggest that they used the same set. But it sure looks the same to me.
Posted by JulieK at 12:07 PM