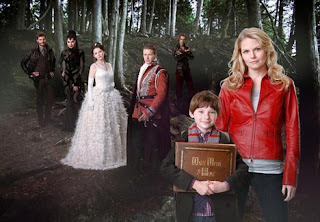 From left, the Hunstman, the Evil Queen, Snow White, Prince Charming,
Rumpelstilskin, young Henry and Emma Swan appear in "Once Upon a Time."
One of the few new TV shows I've liked this year is ABC's "Once Upon a Time," a kind of fizzy-pop/fairy tale/soap opera mix, with stories that show us bona fide fairy tale characters living in a very magical fairy tale realm as well as crossing over to a "real" town called Storybrooke, Maine, with other, more 20th century identities. So we see the Evil Queen acting all evil in the Fairytale world and then being a meanie (and the mayor) under the name Regina Mills. (Regina means queen, get it? I've never heard of Mills having any connection to evil, but there are all sorts of theories floating out there that her last name indicates the Evil Queen's dad was a lowly miller.) And Snow White turns up as a sweet teacher named Mary Margaret Blanchard. (Yes, her name is Blanchard, like blanche, the feminine form of the French word for white.)

As the story unfolds, it seems that almost everybody in Storybrooke has amnesia about their previous lives as Snow White, Prince Charming, Cinderella, Jiminy Cricket (yes, he's in there, too, this being an ABC/Disney show), Gepetto, etc. Our heroine, Emma Swan, is the one person who straddles both worlds, since she was never a fairytale character (the curse that kicked them all out of the magical world happened when she was a tiny baby) and didn't grow up in Storybrooke.

Jennifer Morrison, best known as one of the first-season junior docs on "House," plays Emma, wearing a series of leather jackets and a kick-ass attitude. She isn't buying the "these people are all fairytale characters" story being peddled by a boy named Henry, the biological son she gave up when he was a newborn, who drags her into Storybrooke in the first place. Henry is the one with a big, fat storybook and a steadfast belief in Fairy Tale Land, even if he is the adopted son of big, bad Regina.

Yes, it sounds complicated. It's really not. Once you get past the premise (two worlds/same set of people/different identities) and start rooting for Snow White (Ginnifer Goodwin) and Prince Charming (Josh Dallas) and trying to figure out how Rumpelstiltskin (Scottish actor Robert Carlyle) fits into the picture, you'll be hooked.

To catch the few stragglers who did not try "Once Upon a Time" when it started, and to make sure they all know a hawk from a handsaw, or maybe a Magic Mirror from a Poison Apple, ABC is re-airing six of the seven episodes they've broadcast so far, starting with the pilot episode on Sunday, January 1, at 4 pm here in B-N, on WHOI. That will be followed by "The Thing You Love Most," an excellent episode, "Snow Falls," an even better one, "The Price of Gold," "The Shepherd," and "The Heart Is a Lonely Hunter," where we learned a lot about the Evil Queen and her true villainy and lost a character I liked a lot. Which... Is really too bad. I'm hoping he'll get better treatment in flashbacks to the Fairy Tale World.

That means you can watch the "'Once Upon a Time" marathon from 4 to 10 pm here in Bloomington-Normal, and then tune in for the first new episode of the new year on Sunday, January 8, at 7 pm Central, when the show returns to its normal slot. Coming up in 2012: Hansel and Gretel, Beauty and the Beast, and Rumpelstiltskin's back story. Woo hoo!
Posted by JulieK at 4:08 PM