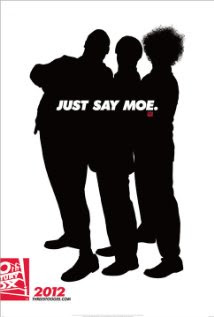 Back in 2002, the distinguished ISU alum played Jerry in the TV biopic "Martin and Lewis" that aired on CBS, opposite Jeremy Northam as Dean Martin. Hayes was nominated for a Screen Actors Guild award for that role, along with a pile of other nominations and several wins he'd already amassed from various awards groups for his work on "Will & Grace."

After that, Hayes did the voice of an ubervillain cat called Mr. Tinkles in two "Cats and Dogs" movies, a supporting role in "The Bucket List," and a starring turn on Broadway as Chuck Baxter in "Promises, Promises." He even hosted the 2010 Tony Awards ceremony that itself won an Emmy.

So if you're Sean Hayes, what do you follow all of that up with? "The Three Stooges." Really?

Yes, really. Hayes is playing Larry, the one with the frizzy, bushy hair, opposite MADTv's Will Sasso (pretty sure he did a Curly impression on that show, too) as Curly and Chris Diamantopoulos, known for playing Rodney on "The Starter Wife" and Rob Weiss on "24" taking on the heavy bangs of Moe, the Stooge leader. The Farrelly brothers directed this masterpiece.

A trailer for this "Stooges" has already been released, although the movie itself won't come out till 2012. (No, they are not squeezing it in before the Oscar deadline is up. Too bad, huh? It's sure to be Oscar bait. HA HA HA HA HA!)

You can see a trailer here at the Internet Movie Database. The plot appears to be something to do with an orphanage, right out of "The Blues Brothers" and/or "Puss in Boots." With added mayhem, eye-poking, pratfalls, a few nuns (played by Larry David and Jane Lynch, among others) and general hilarity. Hilarity of "The Three Stooges" variety has never been my idea of a good time, but I did have a friend in college who absolutely adored them. And Jerry Lewis. Apparently Sean Hayes is listening to her for his career choices.

Imdb says "The Three Stooges" will be released on April 13, 2012. I've added images of the original Stooges and the three new ones here for comparison purposes. 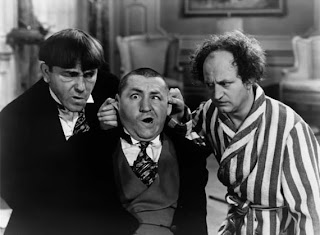 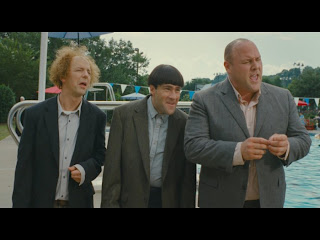