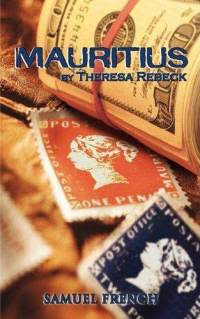 In the play, half-sisters Jackie and Mary have found a stamp collection, left by their recently deceased mother. They are at odds almost immediately over what to do with the stamps and who between them has the right to make that decision.

When Jackie takes the stamps to a dusty, run-down stamp shop owned by Philip, he is mostly uninterested and unimpressed. But Dennis, a guy always on the lookout for a scheme, thinks there's more to Jackie and her stamps than Philip is giving her credit for. Enter Sterling, a wealthy, aggressive collector who isn't the type to fool around.

About these characters, Variety said "The emotionally fraught edges of their twisty encounters [are] made all the more intriguing by the fact that items as apparently innocuous as postage stamps fuel the friction."

When I read the play, I called it "American Buffalo" with girls.

Director Sandra Zielinski will be looking for five actors. The roles are:
Performance dates for "Mauritius" are February 16-19 and 23-26 and March 1-4, 2012. For more information, visit Heartland's website here.
Posted by JulieK at 12:50 PM