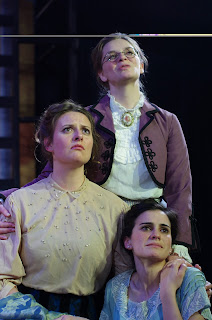 I have been thinking about all things Russian recently – a friend I met in Russian 101 passed away unexpectedly last week, so I’ve been musing over the years I spent and the friends I made while immersed in Russian language and literature in college – which makes “The Three Sisters” especially poignant for me right now.

The sisters in Chekhov’s play, as well as the characters who interact with them, spend a good deal of their time and conversation on what life means, what we can aspire to as human beings, and how we all fit into the larger tableau of history and progress. The question “What difference does it make?” comes up frequently, and Olga’s plaintive “If only we knew” ends the play.

As the three Prozorov sisters yearn to move back to Moscow and the life of music and books and art they remember from their youth, they also hope for a better future with more choices and more life for the generations who follow them. It seems so very Russian (or maybe just so very Chekhov) to have characters who jump headlong into hopeless love affairs, who mourn the passing of the aristocracy even as they look forward to a more egalitarian future, who, when all else fails, try desperately to find meaning in work. They go on. There may not be a reason, they may not make a difference, but they go on. That’s what they do.

The ISU/Heartland Theatre production of “The Three Sisters” is intended as a showcase for the acting talents of Illinois State’s graduate acting class. The play offers strong roles for those eight actors, succeeding nicely on the “showcase” front, but it also succeeds as a play, as a story, as a moving, emotional examination of how human beings, even smart, funny, talented ones (or maybe especially smart, funny, talented ones) can aspire to so much, achieve none of their goals, but still try to maintain a glimmer of hope. Director Sandra Zielinski and her actors establish a warm, engaging mood from the start, pulling us in to the Prozorov family and their world and bringing us along on their so-very-human journey.

Allison Schencker’s scenic design, with its autumnal colors and bare-birches backdrop, adds nicely to the general tableau, making “The Three Sisters” seem like a natural for an intimate setting like Heartland Theatre.

The three actors who portray the sisters – Kate McDermott-Swanson as dutiful Olga, Jessie Dean as tempestuous Masha and Melisa Pereyra as youthful, sweet Irina – are the heart of the play, and all three deliver nicely. (Pictured above, top to bottom, are McDermott-Swanson, Dean and Pereyra, in character as Olga, Masha and Irina. Photo credit: Pete Guither.)

Molly Rose Lewis plays against type as their vulgar, pushy sister-in-law, awful Natasha, and Michael Gamache adds the proper note of regret and overwhelming disappointment as Andrei, the one who brings her into the family.

Josh Innerst does fine work with the pivotal role of Vershinin, the dashing (and married) army commander who blows into their lives like a Buran wind, while Zack Powell is simply perfect as Tuzenbach, cynical and idealistic at the same time, who adores Irina whether she loves him back or not. Well, not perfect. He’s much better looking than the script says, but very appealing and sympathetic in his doomed pursuit of Irina, anyway. Jeb Burris is another one who is cast against type, playing Masha’s somewhat ridiculous husband, a schoolmaster who isn’t really that bright and bores her silly. Burris makes Kulygin a whole person, too, not just a foil, so that you feel for him and wish he’d had better sense than to marry Masha in the first place.

Among the rest of the cast, Henry Woronicz shines as Chebutykin, the doctor (there’s always a doctor in Chekhov) who once loved the sisters’ mother, but now drinks too much and bothers to save lives too little, and Len Childers is quite excellent as moody, insufferable Solyony, the one who looks like Lermontov (the author of “A Hero of Our Time,” one of my favorite books) and keeps poisoning the atmosphere with his dark humors.

After this “Three Sisters,” it’s hard to shake the sad, yearning mood the play and its performances create. Why do they go on? If only we knew. 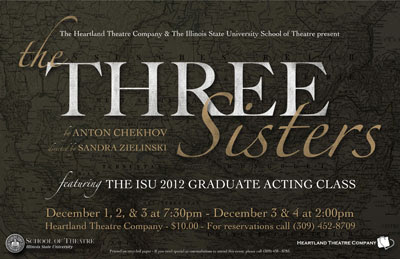 THE THREE SISTERS
By Anton Chekhov.
From a translation by Paul Schmidt.

A presentation of Heartland Theatre Company and
the Illinois State University School of Theatre.

Running time: 2:45, including one 15-minute intermission

All tickets are $10 and all performances are at Heartland Theatre
Posted by JulieK at 11:57 AM