U of I Opens the Semester With "Judas Iscariot"

Next week, the University of Illinois Department of Theatre offers its first production of 2012 with "The Last Days of Judas Iscariot," by Stephen Adly Guirgis. You couldn't miss Guirgis's name last year when his "The Motherf*cker with the Hat," starring Chris Rock and Bobby Cannavale, hit Broadway, scooping up six Tony nominations. 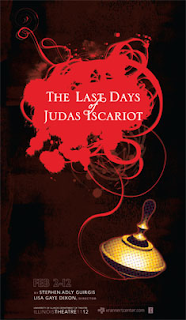 Guirgis is co-artistic director of the LAByrinth Theater Company in New York City, and that's where "The Last Days of Judas Iscariot" had its first production in 2005. Directed by Philip Seymour Hoffman, "Judas" was named one of the ten best plays of the year by both TIME Magazine and Entertainment Weekly. That off-Broadway production starred Sam Rockwell as a catatonic Judas and Eric Bogosian as Satan, the real star of the show, with Mother Teresa, Mary Magdalene, Jesus, several apostles, and Sigmund Freud among the other characters.

U of I's press info labels the play "a metaphysical courtroom drama." Set in a courtroom in a small corner of purgatory, the play probes big issues issues of faith and despair, innocence and guilt, good and evil, as attorneys argue both sides of Judas's case in front of a cranky judge from the Civil War era, bringing in a parade of witnesses from a variety of times past. Can Judas be forgiven, find redemption, and get out of Hell after all these years? Can he even get his case heard?

Guirgis uses his own brand of poetry, including street slang and urban idiom, to give a contemporary, irreverent feel to the speeches of saints and sinners alike. CurtainUp called Guirgis's characters "wildly inventive," while Michael Billington, in his review of the London production for the Guardian in 2008, noted that "What gives the play its life is that Guirgis handles big issues with comic flair."

For U of I, "The Last Days of Judas Iscariot" is directed by Associate Professor Lisa Gaye Dixon, with Nick Narcisi as Judas, Julian Parker as Satan, Kelson Michael McAuliffe as the prosecutor, Tyrone Phillips as the judge, and Neala Barron as Judas's feisty defense attorney, one Fabiana Aziza Cunningham.

"The Last Days of Judas Iscariot" opens Thursday, February 2, and runs through Sunday, February 12. For more information or to reserve tickets, click here. You can even get a sneak peek at the program here in case you'd like to read up on the cast or director (or read the dramaturg's notes) before you go.
Posted by JulieK at 11:57 AM