Planning Ahead for ISU's Winter/Spring Shows

Although January seems like a lazy month for ISU theater, there's a lot going on behind the scenes. Casting was completed in December for ISU's slate of Winter/Spring shows, with work either already started or soon underway in terms of rehearsals and production meetings and planning and writing and drawing and painting and sewing and building...

If you'd like to plan your own calendar so you can be there when all that work comes together in performance, here's a cheat sheet of what's coming and who you can expect to see on stage. 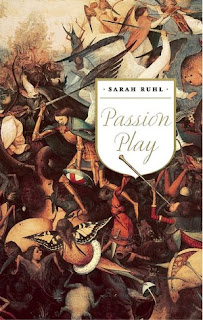 First up in 2012 is the play I am most looking forward to, Sarah Ruhl's "Passion Play," directed by Brandon Ray for the CPA, with performances February 17-25. What makes "Passion Play" stand out is Ruhl's quicksilver imagination. What could've been slow or plodding in other hands -- an examination of the big "Passion Play," the one they do every year at Oberammergau, in three different historical periods -- is instead a fascinating and highly theatrical piece of work. (That's the cover of the published script you see at left.)

We first see a small cluster of regular old folks preparing their "Passion Play" in Elizabethan England, then in Oberammergau while Hitler is in power, and then in a town called Spearfish, South Dakota, during the Reagan years. The same actors appear in all three places, although they show different personas. So we see a smelly young man named Pontius who guts fish for a living, rehearsing to play Judas in England. The same actor becomes a footsoldier in Hitler'a army, still playing Judas, in Germany, and then a Viet Nam vet called P, suffering from Post Traumatic Stress Disorder, once again slated to play Judas, in South Dakota. That structure affords Ruhl the opportunity to reflect on those religious roles, as well as how the different communities react to the vagaries of everyday life, love, power, faith, theater, and yes, passion.

For ISU, Matt Bausone, who memorably played upstart Crow in Sam Shepard's "The Tooth of Crime" last spring, has been cast as Pontius/Foot Soldier/P; with Jeff Kurysz, seen in "Women of Lockerbie," as John/Eric/J (the threesome who play Jesus); Clayton Joyner, winner of the national Irene Ryan award last year, and most recently seen in "A Flea in Her Ear," as Mary 1 and Elsa, the Virgin Mary girls; David Fisch ("How to Succeed in Business Without Really Trying") in the pivotal roles of Queen Elizabeth, Hitler and Ronald Reagan, and Ashlyn Hughes ("The Marriage of Bette and Boo") in my favorite role, the combo Village Idiot/Violet.

ISU's Center for the Performing Arts has the space and technical bells and whistles to make "Passion Play" really come alive. Can't wait for this one. 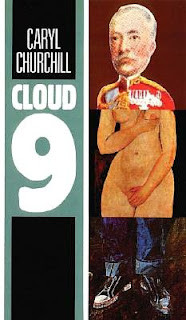 Caryl Churchill's "Cloud 9," scheduled for Westhoff Theatre from February 23 to March 3, is equally quirky, although a quite different kind of quirky, sending up gender and sex roles as it takes a look at the repressive nature of those roles under Colonialism. It, too, straddles disparate time periods, with Act I taking place in a British colony in Africa during Queen Victoria's reign, and Act II leaping to London in 1979. Once again, the same actors show up in both acts, but switching off roles, so that the actor who plays Clive, a Colonial Administrator, in Act I, may show up as Cathy, a five-year-old girl, in Act II, or the actress who played Edward, Clive's son, in Act I, may now be playing Betty, Clive's wife, in Act II. (And the script's cover, shown here, hints at the gender and time shifts.)

Director Jeremy Garrett has assigned the roles in his own combinations, with Alex Kostner and Andrew Rogalny, who both appeared in ISU's recent "Merchant of Venice," Danny Rice and Abby Vombrack, both seen in "Electra" last fall; Fiona Stephens, last seen in "The Women of Lockerbie," Hannah Brown and Nicholas Spindler in his ensemble cast.

William Inge's classic "Picnic," which won the 1953 Pulitzer Prize for Drama, is scheduled to play the Studio Theater at Centennial West from March 29 to April 7. "Picnic" tells the story of one small town's Labor Day picnic and two sisters, Millie and Madge, both attracted to handsome newcomer Hal, who has a bit of a shady past. Is Hal just what they need to spark ideas of freedom and passion? 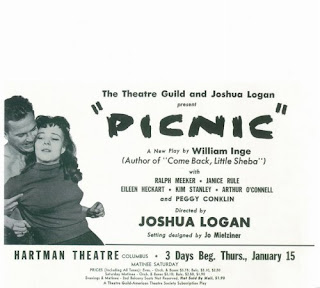 On Broadway in 1953, "Picnic" starred Ralph Meeker, Janice Rule and Kim Stanley, with Paul Newman in his Broadway debut in a smaller role. The poster from a Columbus, Ohio, tryout of that Broadway production is shown above.

Lori Adams is directing this "Picnic" fresh off her successful effort with "Falling" in St. Louis. Adams' cast includes Eliza Morris (last seen in "Women of Lockerbie" and "How to Succeed in Business Without Really Trying") and Betsy Diller as Madge and Millie and Russell Krantz ("Electra") as Hal. 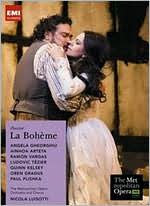 This spring's musical takes an operatic turn with Puccini's "La Bohème," perhaps better known to some Broadway musical fans as the 19th century operatic precursor of "Rent." "La Bohème" requires real voices to sell Puccini's score, and director Connie de Veer has assembled a cast including Andy Hudson and John Ramseyer sharing the role of Rodolfo and Hyejin Park and Caroline Pircorn alternating in the role of Mimi. If you'd like to read more about "La Bohème" before you go, NPR has assembled a nice guide to the show here. And that's the cover image from the Metropolitan Opera's DVD at right.

"La Bohème" is slated for performances in ISU's Center for the Performing Arts from March 30 to April 7. 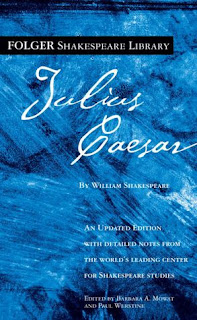 Dea is mixing the genders in this traditionally male-heavy play, with Paula Nowak ("A Flea in Her Ear") as Julius Caesar and Jessie Swiech ("Women of Lockerbie") as Mark Antony. David McGill and Patrick Riley ("The Marriage of Bette and Boo") will play conspirators Brutus and Cassius.

The cover of the many editions of "Julius Caesar" is shown above. This one is from the Folger Shakespeare Library Series.

Tickets for all these shows are now available. Click here for more information.
Posted by JulieK at 10:27 AM