The Ladies of "The Help" Win at SAG Awards 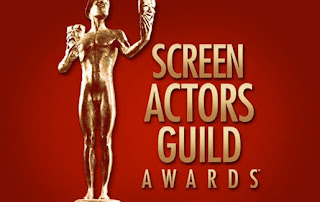 The Directors Guild honors directors, the Writers Guild honors writers, and the Screen Actors Guild honors actors. Pretty simple, right? But because of the "ensemble" prizes at the SAG Awards, it's easy to think they're handing out a Best Picture award, too. But they're not. They're celebrating the actors' part of the movie, and in a way, how the entire cast functioned as an ensemble, not so much how one or two individual performances added up.

And that's why "The Help," plus actors Viola Davis and Octavia Spencer, took home "The Actor," the statue the Screen Actors Guild hands out. "The Help" took its entire cast to Mississippi, asked them to bond, to live on location in each other's pockets for the duration of the shoot, and to become their own little village. Or ensemble. It worked, too. "The Help" may not be my #1 favorite movie of 2011, but I can certainly see why Davis and Spencer picked up their individual awards and why the actors in "The Help" were given the award for Outstanding Performance by a Cast in a Motion Picture. Does it change the odds for who is expected to win at the Oscars? Well, it means Spencer is even more of a lock to win Best Supporting Actress, and Davis is starting to look like a good bet, too, edging out Meryl Streep for Best Actress.

But for Best Picture? I still think it will be "The Artist." "The Artist" has a great ensemble, too, but the success of the movie rests on the shoulders of Jean Dujardin, who plays a smooth leading man from yesteryear whose life changes when the movies start to talk. At the SAG Awards, the fact that Dujardin dominates the movie may have meant it missed the "Best Ensemble" mark. But Dujardin took the Best Actor award that pundits had been calling for George Clooney for "The Descendants," putting that Oscar race in doubt, and making me think that both Dujardin and "The Artist" will walk away with Academy Awards on February 26th.

Rounding out the film awards, Christopher Plummer won the Best Supporting Actor award for his performance in the film "Beginners." Like Spencer, Plummer seems a lock to win at the Oscars, too.

On the TV side of things, "Boardwalk Empire" and "Modern Family" won the Best Ensemble awards for drama and comedy television, respectively, with Steve Buscemi from "Boardwalk Empire" and Jessica Lange from "American Horror Story" taking individual awards for drama, Betty White of "Hot in Cleveland" prevailing as Best Actress in a Comedy Series, and Alec Baldwin winning as Best Actor for "30 Rock" for the sixth year in a row. Time out while I boo the Screen Actors Guild for giving it to Baldwin again and overlooking Steve Carell again. Carell did great work in his last season in "The Office," and he was more than worthy. Baldwin? Same old, same old.

SAG also honored the stunt men and women who worked on "Harry Potter and the Deathly Hallows, Part 2" and "Game of Thrones" as the best stunt ensembles in movies and TV. 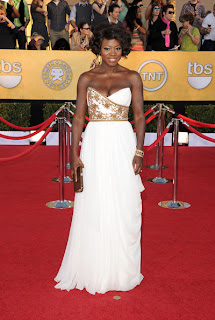 As for the SAG fashions, I thought the ladies of "The Help" made a very good showing. Viola Davis (at left) looked stunning in her white and gold Marchesa gown avec beaucoup de cleavage, while Jessica Chastain, wore an electric blue Calvin Klein column dress (also with a lot of cleavage) that looked amazing with her red hair, Octavia Spencer was all elegance (love the up-do) in Tadashi Shoji, and Emma Stone rocked the place in a short black Alexander McQueen party dress that was adorable on her.
Posted by JulieK at 11:36 AM