"Mad Men" Returns With Love, Sex and a Need to Come In From the Cold 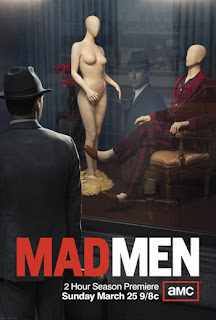 "Mad Men" came back in style last night with the two-hour season 5 premiere, answering some of the pressing questions we'd all been buzzing about since Don & Co. left us in October, 2010. So, yes, Don (the gorgeous Jon Hamm) did marry his toothy secretary, Megan (Jessica Pare). And yes, Joan (Christina Hendricks) did have the baby that we all know came from a midnight tryst with Roger Sterling (John Slattery), even if she's pretending it belongs to her creepy husband, an army doctor serving in Vietnam. Pete (Vincent Kartheiser) and Trudy (Alison Brie) have a baby now, too, plus they're living in the suburbs in a house that looks curiously like the one Don used to live in with his previous wife, Betty the Ice Queen. Lane (Jared Harris), the slightly odd Englishman who stuck around after the British invasion, has somehow convinced his wife to stay in the U.S., even though money is tight for them and he seems decidedly unhappy. Peggy (Elisabeth Moss) is also still with her boyfriend, the underground journalist who is unlike anybody else on the canvas but should be right at home when politics get radical (Turn on, tune in, drop out?) as we move into the late 60s.

We open season 5 on Memorial Day weekend, 1966. I don't exactly know why, except that maybe 9-to-11-ish is when our brains are most susceptible to mass media, but I have specific memories of almost every television show on the air from 1965-67 and a lot of the pop music hits. So the era we are now in on "Mad Men" looks and sounds very familiar to me. Deja vu all over again. Don's wide-open new apartment with Megan, all harvest gold and pop orange, with a huge sunken living room and endless hallways, looks like what we were seeing in the New York apartment in "Family Affair" or the swanky places the spies would have cocktails in "The Man From U.N.C.L.E."

And the clothes... Megan, as a 20-something, showed up in psychedelic colors and mini-skirts, while Peggy has a shorter flip, but still a flip, and the geometric patterns of "That Girl."Yes, they are definitely channeling the right mood for MY 1966.

And as for the plot... It seems everybody is on the outside looking in (see poster, above), searching for some sense of belonging, of fitting in, from the beginning, from the line of black equal employment protesters outside their offices on Madison Avenue, to Joan wondering if her job is waiting for her and feeling pretty much at sea as a mom, Lane obsessing over the photo of a woman he's never met, one who seems very inappropriate for him, Pete wishing he still lived in the city because he hates the Burbs, Roger clinging to his lonely, sterile white office, and Don and Roger looking across a crowded room at Megan and the hipsters, the younger generation, laughing about something that Sterling and Draper are too old fogeyish to understand.

We got some gaps going on here. We've also got themes that go back to the very beginning of "Mad Men." Who are these people, really? Are they defined by where they live and what they do for a living? Or by the people they choose to sleep with or share their lives with? Will they ever find the perfect place where they don't have to worry about shifting sands under their feet, where they truly belong?

Peggy comments that she doesn't recognize the new Don, the happily married man who seems to be smiling and kind and not bullying clients. To be sure, Don and Megan are in a honeymoon phase at the outset, all snuggly and sexy and touchy touchy. But then Megan throws him a a surprise party for his birthday, bringing Work People into his home, mixing Don's worlds and really, really, making the wrong call as far as her new husband is concerned. (I have to agree, by the way, that Megan should never have performed her sexy "Zou Bisou Bisou" dance as a birthday gift in front of the entire office. Not only does it make Don uncomfortable because it's so intimate, but COME ON, Megan! You work with these people, too! Do you really want to face your co-workers after basically doing a lapdance in front of them? Even if it hadn't been all wrong for Don's personality, it is clearly wrong for a woman who wants to be taken seriously at work.)

But it's when they're alone and Don watches her, stripped down to some racy black undies, on all fours "cleaning the house" that bits of the old Don emerge, the one who liked it hard and cruel with Bobbie Barrett, the one who always retreats to lust and mindless sex when times get tough. Megan seemed to understand that, too, with her little "You can't have this" games. She may be less flinty and more emotionally stable than Betty, but there doesn't appear to be much more than sex keeping those two together, which doesn't bode well for their future.

And oddly, there were hints that there be something brewing with Don and Joan. Joan's mother suggested that Megan wouldn't want Joan back at the office, getting too close to Don, plus Joan had a line reflecting on just how handsome Don Draper is. Where did that come from? Is it going anywhere? I hope not.

Some other good things about the episode: Betty was nowhere to be seen, Sally (Kiernan Shipka) is just as awesome as ever, Pete absolutely deserved a bigger office (although why Harry had one in the first place I don't know. Harry's not a partner, is he?), I still love Trudy, John Slattery's Roger gets the best lines and delivers them perfectly, and I absolutely adore Dusty Springfield's "You Don't Have to Say You Love Me," which played over the closing credits. Word is that the song was a late replacement for Dusty's version of "The Look of Love," which has a very different mood. "You Don't Have to Say You Love Me" is a darker song, post-break-up, with the woman intending to follow the guy and "beg him to come home," even though she's well aware he doesn't really care about her anymore, while "The Look of Love" indicates there might actually be some feeling there. Hmmm... If "Look of Love" was the first choice, maybe Don does have real feelings for Megan, or her for him. Or maybe it was meant ironically? Oh, "Mad Men." You and the endless questions you pose. There is never going to be a tidy resolution of anything, is there?

All in all, I found this a very satisfying return, reeling me back into the world of "Mad Men" with sneaky scenes full of subtext and a whole lot of the maddening character mysteries that creator Matthew Weiner weaves so well.

Welcome back, "Mad Men," and your dirty little secrets, too.
Posted by JulieK at 1:40 PM