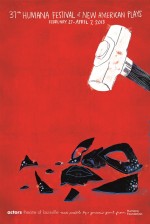 As promised, Actors Theatre of Louisville has announced what new plays will be on the schedule for its 2013 Humana Festival of New American Plays next spring.

This time out, there will be full-length plays from Jeff Augustin, Mallery Avidon, Will Eno, Branden Jacobs-Jenkins and Sam Marks, with a piece created for Actors Theatre's Apprentice Company by Rinne Groff, Lucas Hnath and Anne Washburn. There will also be a program of 10-minute plays, with Sarah Ruhl the only announced playwright so far, since Actors Theatre's 10-minute play competition is still underway and one or more of the other plays may be chosen from that contest.

New Actors Theatre Artistic Director Les Waters will direct Will Eno's play, called Gnit. As you might guess from the name, Gnit is a new take on Peer Gynt, Henrik Ibsen's rambling adventure about a shiftless sort of man who travels around the world, running into a king, dairymaids, trolls, brownies, nixies, gnomes, Bedoins, madmen, missionaries, the Sphinx and the Devil. This Gnit promises to be a "rollicking and very cautionary tale about, among other things, how the opposite of love is laziness."

Appropriate is the title of Branden Jacobs-Jenkins' new play, although without hearing it said aloud, I don't know if the piece is supposed to be the adjective appropriate, as in suitable or fitting, as opposed to the verb appropriate, as in, borrow without permission. Given that the play's action begins when the three adult children in the Lafayette family "descend upon a crumbling Arkansan plantation to liquidate their dead patriarch’s estate," I'm going to guess it's the verb appropriate, the one that is just a stone's throw from steal.

Gary Griffin, who is the Associate Artistic Director at Chicago Shakespeare Theatre, where he recently directed a phenomenal production of Sunday in the Park with George, will be at the helm of Appropriate, his first directing gig at Actors Theatre.

Meredith McDonough, Actors Theatre's Associate Artistic Director, directs The Delling Shore, Sam Marks' look at competing novelists -- one successful and one struggling -- and their daughters, who also aspire to write. It's really hard not to take sides when push comes to shove, when wordplay becomes just as cutting as knives.

Cry Old Kingdom, about an artist trying to survive in Papa Doc Duvalier's Haiti, marks Jeff Augustin's professional debut as a playwright. It will be directed by Tom Dugdale, recipient of the 2012 Princess Grace Award in Theater with La Jolla Playhouse.

You can probably surmise from the title of Mallery Avidon's O Guru Guru Guru or why I don’t want to go to yoga class with you that it involves yoga or the lack thereof. Directed by Lila Neugebauer, O Guru Guru is a "disarming look at the precarious process of becoming yourself." Whether that means yoga or not.

The subject matter of the apprentice showcase, conceived by Amy Attaway and Sarah Lunnie, directed by Attaway, and penned by Rinne Groff, Lucas Hnath and Anne Washburn, is also apparent from the title. Sleep Rock Thy Brain is about... Sleep! Or at least the "rich complexities of the sleeping brain," explored through science, spectacle and theatrical invention.

Last year's apprentice piece was about food, and we got brownies on the way out. Maybe this year, they'll give us pillows. That would be exciting.

The Humana Festival, which is supported and sponsored by the Humana Foundation, begins February 27 and runs through April 7, 2013. Various packages and weekend deals are available for different audiences throughout that time period, with specific information on who goes when here.
Posted by JulieK at 6:44 PM