The Pantagraph's Holiday Spectacular takes the spectacular part of its name quite seriously, annually involving a cast and crew of over 300, plus an assortment of sheep, donkeys, goats, puppies, llamas and camels. In the past, the Holiday Spectacular has combined professional and amateur local talent that includes special needs children and adults, school groups, church choirs, the Boys and Girls Clubs, and a variety of local singers, dancers and actors.

Again this year, Nancy Steele Brokaw has written the script, and Lori Adams will direct. I can't even imagine how Adams manages to corral that many people into a unified whole, but she'll get help from musical director Kathryn Henderson, choir director Michael Schneider, children's choir director Dee Henderson, and choreographers Janet Hayslip-Streenz and Stacy Terry.

Because community involvement in the cast is so large, there's a pretty good chance you will see someone you know if you venture forth to catch the Spectacular in one of three performances from December 7 to 9 at the Bloomington Center for the Performing Arts. If you'd like to peruse this year's cast list to look for your friends and neighbors, it's posted right here, but it may take you awhile to get through the whole thing.

That list also gives you a hint of what to expect, what with separate groups of tappers and Wooden Soldiers, as well as the Dobski Dancers, dad-and-daughter dance teams, a vocal jazz ensemble from State Farm, and a troupe of eight actors, including State Representative Dan Brady playing himself. 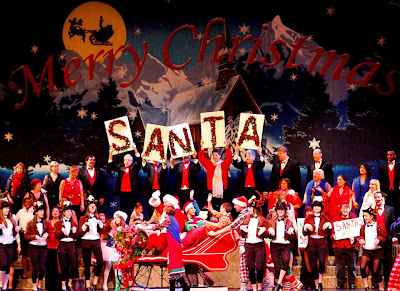 For more information on the 2012 Holiday Spectacular, check out their Facebook page and website. Ticket information is available here.
Posted by JulieK at 1:27 PM