HISTORY IS MADE AT NIGHT a Blast From the Past 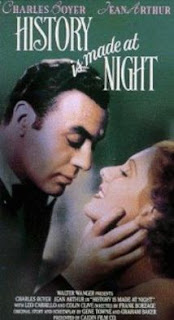 There are always interesting bits and pieces of cinema history showing up on Turner Classic Movies, and History Is Made at Night, which aired this morning at 5 am, is certainly in that category.

For starters, it was directed by Frank Borzage, someone you don't hear much about anymore, even though he won the very first directing Oscar for 7th Heaven, a 1927 Janet Gaynor/Charles Farrell tearjerker about a lowly sewer worker and the woman he loves, both caught up in World War I. Although he started as an actor, Borzage was a working director in Hollywood from the days of silent films, from 1913's The Mystery of the Yellow Aster Mine (according to the Internet Movie Database, anyway), all the way up to a 1961 Italian/French production called Journey Beneath the Desert, about a helicopter crew that crashes into the lost city of Atlantis. Borzage started that one, but couldn't complete it due to illness, and he died in 1962.

After the Oscar for 7th Heaven, he picked up another one for a little-known film called Bad Girl (about "a mug and a jane") in 1931, and he won a lifetime achievement award from the Director's Guild of America in 1961.

His films were known for a deeply romantic streak, casting lovers against turbulent, destructive forces beyond their control, whether those forces were war, society, clash of cultures, family issues, Fascism, or a really nasty husband, as in History Is Made at Night.

And that's what makes History Is Made at Night a curiosity. It intertwines the dark story of an abusive husband who is always lurking in shadows, filled with rage and jealousy, with a very sweet, light romance between a beautiful society woman and the best headwaiter in Paris. Colin Clive, Dr. Frankenstein himself, plays the horrible husband, while the dashing Charles Boyer is the swoony headwaiter who takes about five minutes to fall completely and totally in love with the wife, played by the always charming Jean Arthur. Arthur is Irene Vail, the unhappy wife of shipping magnate Bruce Vail. She leaves him, intending to get a divorce, but he pulls an ugly trick, paying her chauffeur to get her into a compromising position to hold off the divorce. (I admit I don't understand that scheme, since it seems being caught with a lover would be grounds for a divorce, not an obstacle to one. See: The Gay Divorcee. But that's the plot we're working with in History Is Made at Night, so we may as well go with it.)

In any event, Boyer's character Paul Dumont is the one who saves Irene from the evil henchman, er, chauffeur. Dumont carries her off to the restaurant where he works, introduces her to his best pal, excitable Italian chef Cesare, and the two dance the night away.

That part of the story is quite lovely, all Lady and the Tramp meets Midnight, and it suits the fizzy charms of Jean Arthur and Charles Boyer perfectly. Meanwhile, the gothic horror portion of the story is cloaked in sharp angles and deep shadows, and it and Colin Clive seem to belong to a completely different movie.

And then there's the third jagged piece of this ill-fitting puzzle. When we get to the point where Irene and Paul get past her husband's dirty tricks, reunite and board a ship for Paris to clear their names, History Is Made at Night suddenly turns into a Titanic melodrama. Remember when I told you that Bruce, the horrid husband, is a shipping tycoon? Well, Paul and Irene are stupid enough to make their trip on one of his ships. Ol' Bruce is furious that Paul and Irene are back together and there's nothing he can do about it, so he basically orders the captain of the ship they're on to "Damn the icebergs, full speed ahead!" So, of course, the ship obligingly smacks right into an iceberg and our lovers are in peril once again. Will they split up for lifeboat reasons? Will they go down with the ship? And what about Cesare, who stowed away just to cook for Paul on the transatlantic crossing?

I should note that the Hindenburg also makes an appearance, although the movie was released just before it went up in flames, so the ill-fated airship is referred to here as a dandy way for rich people to get from New York to Europe, rather than another transportation disaster thrown into the mix.

With or without the Hindenburg, the film suffers from the juxtaposition of these three very different moods. It comes off camp when Colin Clive is in full-out villain mode, cheeky and adorable whenever Charles Boyer is front and center, and then weepy and turgid when we enter Titanic mode. It should not come as a surprise that it credits two screenwriters (Gene Towne and C. Graham Baker) and two "additional dialogue" writers (Vincent Lawrence and David Hertz) and features some uncredited script contributions by director Borzage.

All in all, History Is Made at Night is a curiosity, showing off just why Jean Arthur and Charles Boyer were stars, as they can rise above the material, as well as why Frank Borzage succeeded in Hollywood, with his penchant for adding a whole lot of mood through brooding, atmospheric camerawork. Note that Citizen Kane's Gregg Toland was an uncredited cinematographer.

History Is Made at Night has already aired on TCM, but it is also available in their On Demand selections on Comcast cable through November 23rd, if you're so inclined.
Posted by JulieK at 12:32 PM