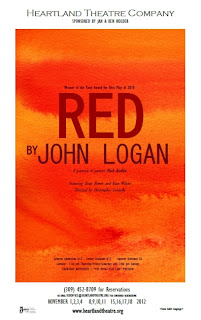 Heartland Theatre's Red is simply staged and clearly directed and acted, with a strong dramatic punch as we get to know these two men over the course of those 90 minutes. We see the artist and his studio up-close and personal, getting a glimpse into the jagged, difficult mind of someone in the midst of creation. Dean Brown's sharp, uncompromising portrayal of Rothko shows us a smart, verbal, challenging man, someone who understands his own process but has no patience for anyone else's. Why should he? He's Rothko.

As the play unfolds, we understand that Rothko has been paid a hefty sum of money to paint a series of murals for the Four Seasons restaurant in New York's fancy Seagram Building. But he decries commercialism and the kind of art patron who just wants something to hang over a mantle. True art should be reserved for the worthy, the discerning, the wise few who evidence the right depth of understanding. When his assistant points out that making these murals for the Four Seasons is the height of hypocrisy, that Rothko is really "just decorating another dining room for the super-rich," creating "the world's most expensive over-mantles," Rothko retorts that he hopes that his dark, disturbing paintings will "ruin the appetite of every rich son-of-a-bitch who eats there."

Is he telling the truth? Or deluding himself that his motives are purer than money and fame? It's hard to know, even when the play is over. But it's that conflict, the reds and blacks swirling around in Logan's script, that makes the performance fly by so quickly, and makes it work so well as a piece of drama.

Christopher Connelly directs his actors -- Brown as Rothko and a fresh-faced Rian Wilson as the assistant -- with an eye on clarity and conflict, creating scenes that pull you in and hold you. Brown is terrific as Rothko, turning from overbearing to small and petty, from frustrated to terrifying, and making it all believable under the skin of one complicated man. And Wilson is a proper foil as the untested young man who just tries to keep up with the master until he's taken as much as he can take.

In the end, this Red is about the art of theatre as much as it's about the art of painting, about the need to create, to communicate, to find an audience who will understand and make the struggle to create worthwhile. For me, the efforts of Connelly and Brown and Wilson -- and scenic designer Kenneth P. Johnson, costume designer Gail Dobbins and lighting designer Anita McDaniel -- were definitely worthwhile to bring Red to life.

For reservation information, click here.
Posted by JulieK at 6:43 PM