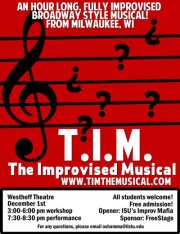 Did you ever watch Whose Line Is It, Anyway? -- either British or American variety -- when they improvised songs? I'll never forget Mike McShane and Josie Lawrence making up a love song about kitty litter for the "Song Styles" section of the British program.

Who ever thought feline defecation could be such a swell and singular sensation?

I have no reason to think that T.I.M. (The Improvised Musical) ever makes up songs about cat poo, but then again, they very well could. T.I.M. is a Milwaukee-based musical improv group. At each and every show, they promise to "create a whirlwind story in song and dance right before your eyes, based solely on the audience’s suggestions! Plus, the show is accompanied by a 3-piece band that improvises songs you've never heard before!"

That means, if they're going for a kitty litter musical, it will be a whole #@%^ musical, not just one little love song. Take that, Whose Line!

And you don't have to go to Milwaukee to participate or toss them a suggestion, either. T.I.M. is coming to Bloomington-Normal tomorrow night, December 1, with a workshop from 3 to 6 pm and a performance from 7:30 to 9, all at Westhoff Theatre on the Illinois State University campus. This tour is T.I.M.'s first, and ISU is their first stop. 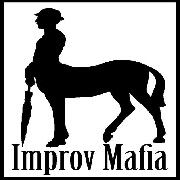 The workshop will include three sections, with info on acting and voice, improvising with the band, and a theatre administration Q and A. They note that you do not have to be present for all three pieces of the workshop, and, in fact, the band portion might just overlap with the theatre administration part. That doesn't make a whole lot of sense to me, but then, I'm not a free-spirited master improv troupe that makes its own rules and sets its own schedule.

Part of the schedule they're setting for tomorrow is an opening act, which will be ISU's own Improv Mafia.  I'm guessing the Improv Mafia folks will also be participating in the workshop portion of the afternoon, since... Why wouldn't they? They have T.I.M. coming to play with them!

This event, like so many cool and different theatrical things happening on campus, is sponsored by FreeStage.
Posted by JulieK at 7:30 PM