If you love White Christmas -- either the Irving Berlin song as a stand-alone or the 1954 Paramount film starring Bing Crosby and Danny Kaye -- you'll get three chances to bask in the snowy glow this season.

Both the 1942 movie Holiday Inn, where the song was introduced, and Community Players' stage version of the famous film will open locally on November 29. 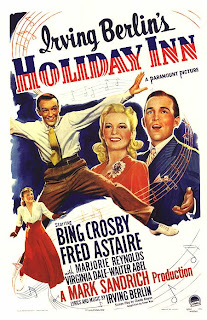 The movie Holiday Inn features der Bingle with Fred Astaire instead of Danny Kaye, as Bing and Fred play a pair of song (Bing) and dance (Fred) men. In this one, they're feuding over girls (first Virginia Dale and then Marjorie Reynolds) and career aspirations, as Fred dumps the act to be a duo with Lila (Dale) while Bing runs off to a country inn in Vermont to open his own holiday-inspired supper club, with Linda (Reynolds) as his vocal partner. Complications, disguises and dirty tricks ensue, and there are a lot of musical numbers matched to holidays, with "Let's Say It with Firecrackers" for the 4th of July and "Be Careful, It's My Heart" for Valentine's Day. What they do for Abraham Lincoln's birthday is best left unsaid. But Fred's firecracker dance is a pip, and both "Happy Holiday" and "White Christmas" (the song) are lovely.

The Normal Theater will screen Holiday Inn on November 29 and 30 and December 1-2, with all shows at 7 pm. 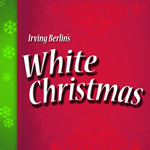 Community Players takes on the musical version of White Christmas adapted for the stage, with music and lyrics by Irving Berlin and a new book written in 2004 by David Ives and Paul Blake. This time, entertainers Bob Wallace and Phil Davis team up with a sister act to try to save the Vermont inn owned by the general the men served under in World War II. It also features "Happy Holiday" and "White Christmas," of course, as well as quite a few songs you'll recognize from the movie, like "Sisters," the one about the "devoted" sisters who don't let anything come between "me and my mister," "Snow," "Love, You Didn't Do Right By Me," and "What Can You Do With a General?"

Deb Smith directs this sweet, sentimental musical for Community Players, with a cast led by Ray Rybarczyk and Jason Strunk in the Bing and Danny roles, with Lindsey Kaupp and Larisa McCoy as the tuneful Haynes sisters. Co-producer John Lieder plays the general whose inn they're trying to save, while Mary P. Weise plays his wisecracking housekeeper and John D. Poling steps in as Ralph Sheldrake, an old army buddy of the boys.

The show opens with a preview performance at 7:30 pm on Thursday, November 29, followed by performances November 30, and December 1-2, 6-9 and 13-16. Click here for ticket information. 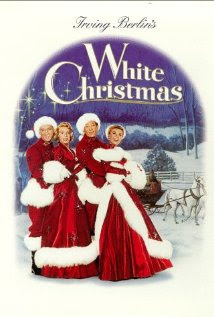 And if you'd like to compare and contrast the stage and screen versions of the same story, the Normal Theater will also bring White Christmas the movie to town from December 6 to 9. As noted, the score and story are much the same, although you're trading an in-person musical sung and danced in front of you by friends and neighbors for the Technicolor version with movie stars on the big screen at the vintage Normal Theater. Totally different experience!


You might want to go for both (or all three) if your holiday spirit is in need of a boost.
Posted by JulieK at 11:24 AM