NOISES OFF a Slapstickstravaganza at ISU 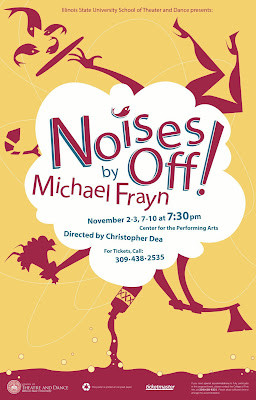 Illinois State University digs deep into the comedy well to bring us Noises Off, Michael Frayn's hilarious farce-within-a-farce, through November 10 at the Center for the Performing Arts on the ISU campus.

For ISU, MFA directing candidate Christopher Dea takes the reins of this slaptickstravaganza about a hapless (very, very hapless) theatre company on the road with a terrible sex farce. Frayn has supposedly said that he got the idea for the script after watching a farce he'd written for Lynn Redgrave from the wings and realizing that what was happening backstage was even funnier than what was on stage. That's why we see both front and back of the stage for both Noises Off and Nothing On, the farce inside Noises Off.

If you want to know what the greater purpose is in the play, there's a line from the character of Lloyd Dallas, the director of Nothing On, that explains it all neatly. It's doors and sardines, of course. "That's what it's all about, doors and sardines," Lloyd says. "Getting on, getting off. Getting the sardines on, getting the sardines off. That's farce. That's the theatre. That's life."

There are plenty of doors and plenty of sardines in this particular production, with doors (and a nifty revolving set) provided by scenic designer Andrew Sierszyn and some very neat and tidy sardines apparently supplied by Props Master Danielle Wiseman. (There's no props designer listed in the program.)

Although the comedy is a bit slow in the early going, the pace picks up in Acts II and III with good results and some clever transitional staging. Among Dea's cast, Nico Tangorra (as Garry Lejeune, the romantic lead on and off-stage) and Hannah Brown (as gossipy Belinda Blair) show the best grasp of the terrible-actors-trying-to-play-terribly-written-roles concept, while Joseph Faifer (as old boozehound Selsdon Mowbray), Kyle McClevey (director Dallas) and Nicholas Spindler (as sleep-deprived stage manager Tim) grabbed the most laughs at the opening night performance I saw.

NOISES OFF
by Michael Frayn

Running time: 2:40, including one 15-minute intermission

For more information, click here.
Posted by JulieK at 10:44 AM