The publishing industry has been undergoing a lot of changes since the ebook has taken hold, with many authors taking advantage of the chance to resurrect their backlists. Susan Carroll, the award-winning author of the Dark Queen, Bride Finder and St. Leger series of historical romance novels, has made three of her older books available on Amazon for Kindle readers. That means current readers now have the opportunity to read these wonderful books.

All three of these newly available titles were written for Berkeley in the early 90s under Susan's Serena Richards pseudonym. That means you might be able to find used copies if you look hard enough, but the Kindle editions are 1) easy to locate, 2) easy to use on your Kindle, and 3) lovely, with spiffy new cover images.

Susan has chosen more representative covers for these new editions of her books, as you can see here. There's Masquerade, set in 18th century England and France, with Lady Phaedra Grantham (you have to love a book with a heroine named Phaedra) fascinated by a mysterious French nobleman. As the Kindle listing teases: "Phaedra is drawn to the man, despite her growing suspicion and fear. What secret does Armande hide behind his aristocratic mask? And what danger does Phaedra face when love itself may prove to be nothing more than a masquerade?" Masquerade was very much loved by readers when it was first published, and well worth adding to your Kindle now. 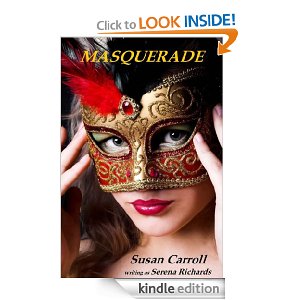 The second book she's made available is Rendezvous, a delicious romantic suspense tale set mostly in France during Napoleon's Empire period. (That qualifies it as a Regency for romance readers, even if it is in France instead of England.)  Isabelle Varens and Sinclair Carrington are both spies, both involved in all kinds of intrigue, including trying to take down Napoleon himself. 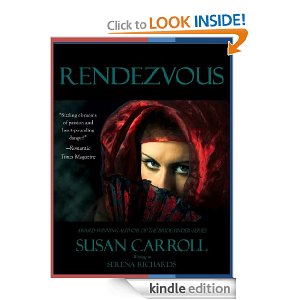 And last, Susan brings us to one of my favorite historical periods -- the turn of the 20th century -- with Escapade, set in New York City. The heroine, Rory Cavanaugh, owns a hot-air balloon company that isn't doing too well, so she turns to a dark, handsome millionaire for help. But that comes with complications. This romantic adventure "sweeps from the glittering mansions on Fifth Avenue to the dark underworld of Five Points." 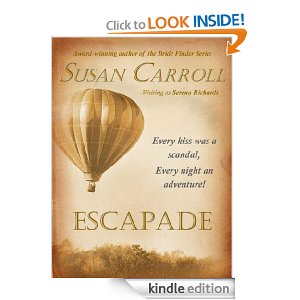 You can visit Amazon to find Kindle editions of Escapade, Masquerade and Rendezvous for $4.99 each.