Dance with the Devil in the Globe's DOCTOR FAUSTUS on Screen

Shakespeare's Globe On Screen, a project to share performances from the Globe Theatre in London with audiences worldwide by way of movie screens, brings us a non-Shakespeare choice next week, as Christopher Marlowe's Doctor Faustus comes to local screens Tuesday November 13 at 7 pm.

Marlowe was a contemporary of Shakespeare's who wrote Tamburlaine the Great and Edward the Second, and was known for writing heroes who went too far. He was also fond of getting into trouble (maybe a Catholic in a time when that was dangerous, maybe a counterfeiter to further Catholic causes, maybe a spy) and he died under mysterious circumstances when he got stabbed in the eye in a tavern in 1593 at the age of 29. Live fast, die young, write Doctor Faustus for the stage, get stabbed in the eye.

This Doctor Faustus was directed for the stage by Matthew Dunster, and stars Paul Hilton as the doctor who swaps his soul for a few magic tricks, with Arthur Darvill as Mephistopheles, the wheeler-dealer sent by the Devil to make the bargain. You may recognize Darvill's name from his stint as Dr. Who's pal Rory. The image below shows Darvill in his Mephistopheles garb, accompanied by some scary horned guys. 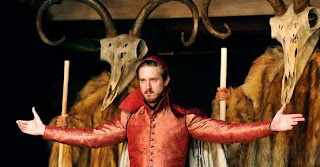 The Globe billed their production as "a terrifying exploration of the human and the divine," and Neil Norman called it "Rude, robust, bawdy, magical and violent" as well as "a provocatively entertaining production" in the Daily Express. Other critics didn't respond as well to the piece, however, with the Guardian's Brian Logan suggesting that it "musters little by way of divine terror. You leave feeling you have plumbed the contents of the theatre's wardrobe department, not the depths of the spiritual abyss."

If you'd like to check out the promotional video that accompanied the stage production, it's available on Youtube. I have to say, those costumes do look pretty darn cool.

Locally, Doctor Faustus will play on screen at 7 pm on Tuesday the 13th at the Palace Theatre on Towanda-Barnes Road. There are also Decatur and Champaign options if you check its page at Zap2It.