Grab a Seat for DINNER AT EIGHT Tonight on TCM 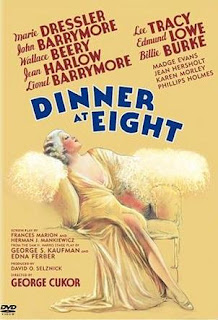 If you look at the DVD image for Dinner at Eight, an MGM prestige pic from 1933, you'd guess that it's a Jean Harlow vehicle. And you'd be wrong. In the tradition of Grand Hotel, made in 1932, Dinner at Eight features overlapping stories, fabulous wardrobe and excellent production values, as well as some of the biggest names MGM had to offer.

With two Barrymores (John and Lionel), Wallace Beery, Billie Burke, Marie Dressler, Madge Evans, Harlow, Jean Hersholt and Lee Tracy, there are stars all over Dinner at Eight. Director George Cukor and producer David O. Selznick were also at the top of MGM's food chain, and they were working with an Edna Ferber/George S. Kaufman play adapted for the screen by Herman J. Mankiewicz and Frances Marion. Some pretty fancy names there. 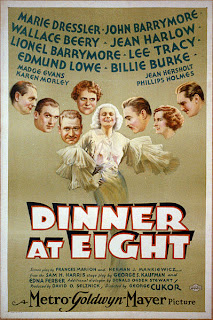 But what's really great about Dinner at Eight is not all the star power, not even the snappy lines handed to Dressler to hurl at other people. It's the interplay between the characters. People remember it as a droll comedy of manners where social climbers and rich folk trade quips before a swanky dinner party. And it is that. Still, the key to Dinner at Eight is that the social climbers have the cash and the rich folk are teetering on the brink of financial disaster. There are machinations, manipulations and doublecrosses at every turn, along with Jean Harlow in a gorgeous slipper satin gown and Marie Dressler doing it up proud as Carlotta.

Dressler had been a big star in vaudeville before she turned to moving pictures, and she'd won an Oscar for Min and Bill, where she brought warmth and charm to the role of Min, a rawboned, rough-and-tumble gorgon running a waterfront dive. In that movie, the sloppy, sozzled object of her affections was played by Wallace Beery, her co-star in Dinner at Eight, who'd won an Academy Award of his own for his role in The Champ in 1932.

The two would be unlikely movie stars now, since neither was what you might call a looker. If you're looking for Angelina Jolie and Brad Pitt, Dressler and Beery are not it. Beery was perfect for his role in Dinner at Eight, where's he supposed to be a crass mining tycoon who "smells of Montana," but Dressler seems a strange choice for Carlotta, who we're told was a major leading lady of the stage and a famous seductress in her personal life. Let's just say that Dressler was playing against type, and it's to her credit that Carlotta is always believable, amusing and relatable in Dinner at Eight. I'm guessing she's the one most people at home would want to invite to their own dinner parties.

So what exactly is the party we never quite get to in Dinner at Eight? The movie opens with society swells Millicent and Oliver Jordan, played by the lovely Billie Burke, who you might recognize as Glinda the Good Witch in The Wizard of Oz, and Lionel Barrymore, mean old Mr. Potter in It's a Wonderful Life. Millicent is the one planning the party, in honor of a visit from a British Lord and Lady with both money and gold-plated aristocratic credentials. Millicent doesn't know that her husband's shipping company is on the brink of a takeover, and Oliver doesn't know that the brash self-made millionaire he's looking to for a loan is the one behind the buyout.

Beery's Dan Packard and his beautiful wife Kitty, played by Jean Harlow, are expected for the dinner Millicent is planning, along with the Jordans' daughter, Paula (Madge Evans) and her fiance (Phillips Holmes); fading stage legend Carlotta Vance (Dressler), who was once Oliver's lover; an alcoholic movie star Lothario named Larry Renault (John Barrymore) who is secretly involved with Paula; and a sex addict doctor (Edmund Lowe) who's been sleeping with Kitty, who happens to be his patient.

Various plot threads unravel as we get closer to 8 o'clock, with Larry the movie star and Oliver the shipping magnate both experiencing career and health crises, everybody's illicit love affairs uncovered, everybody looking for money, and lots of conflict involving class, cash, sex and social position.

Although the financial woes underline everything, this is a seriously fun movie, with the Harlow/Dressler conversations the best of the bunch. This exchange has gone down in movie history:


Kitty: I was reading a book the other day.

Kitty: Yes. It's all about civilization or something. A nutty kind of a book. Do you know that the guy says that machinery is going to take the place of every profession?

Carlotta: Oh, my dear, that's something you need never worry about.

Dinner at Eight starts at 8 (of course) Eastern time on Turner Classic Movies. That makes it 7 for the Central time zone people, but we'll have to deal. I didn't have time to send out engraved invitations, but I hope you'll all show up for Dinner, anyway. It's a very tasty movie.
Posted by JulieK at 1:09 PM