Community Players and director Cris Embree will hold auditions for their January production of Ken Ludwig's Lend Me a Tenor on December 10 and 11. Tenor is an opera-inspired comedy from farceur Ludwig, who loves to play games with lookalikes, disguises, comic predicaments and sight gags.

In the play, personnel at the Cleveland Grand Opera Company are beyond excited to welcome famed tenor Tito Merelli to their company for a one-night-only performance of Verdi's Otello. Max, a lowly assistant to the opera's general manager, is given the job of making sure nothing goes wrong, but the larger-than-life tenor and his hot-tempered wife are quite a handful. There are added complications from everybody in Cleveland who wants to meet, sing with or get close to Merelli, from opera patrons to hotel staff and Max's girlfriend. As everything goes wrong, Max may have to don an extra Otello costume and sing the role himself. Oops!

Lend Me a Tenor is scheduled for performances from January 25 to February 3 at Community Players Theatre at 201 Robinhood Lane in Bloomington.

Embree will be looking for four men and four women to play the following roles:

MAX, 25-35. Assistant to Saunders who fancies himself a tenor.
MAGGIE, 25-35. Max's girlfriend and Saunders' daughter. She has a major thing for Merelli.
SAUNDERS, 50s-60s. Maggie's father, General Manager of the Cleveland Grand Opera     Company.
TITO MERELLI, 40s-50s. A world-famous Italian tenor, known as Il Stupendo to his fans.
MARIA, 40s-50s. Tito's wife. She's fiery and passionate, and none too pleased with her husband's womanizing ways.
DIANA, 35-45. A sexy soprano who will do what it takes to get ahead.
JULIA, 55-65. Chairman of the Opera Guild. A grande dame.
BELLHOP, 20-35. He, too, is obsessed with Merelli, opera and getting into that hotel room. 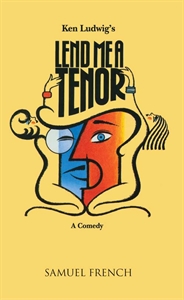 Lend Me a Tenor has been on Broadway twice, with a 1989 production starring Victor Garber as Max and Philip Bosco as Saunders, and a 2010 revival with Justin Bartha, currently starring on TV's The New Normal, as Max, Monk's Tony Shalhoub as Saunders and Anthony LaPaglia as Tito Merelli.

The play won Tony Awards in 1989 for Bosco (Best Actor) and Jerry Zaks (Best Director), along with a pile of Drama Desk Awards and Tony nominations.

For more about Community Players' production, you can visit the CP website here.
Posted by JulieK at 8:06 PM