Austin Pendleton is hard to miss. He's been in a bunch of movies you'd recognize -- "Catch-22," Billy Wilder's "The Front Page," "Starting Over," "My Cousin Vinny," "Mr. and Mrs. Bridge," "Amistad," "A Beautiful Mind" -- as well as lots of compelling appearances on TV shows and on stage, with a Drama Desk and an Obie for his acting and a Tony nomination for his directing, as well as a special Drama Desk award for being a "Renaissance man of the American theatre." He's also written successful plays, including "Booth" and "Orson's Shadow." He's been an ensemble member at Steppenwolf since 1987, directing and acting in productions like "The Crucible," "Uncle Vanya," "The Sunset Limited," "Educating Rita," "Detroit," and the current "Time Stands Still." Oh, and he was the voice of Gurgle in "Finding Nemo."

Small in stature, usually wearing round wire-rimmed spectacles and either a bemused look or a slightly loopy grin, he has a stage and screen persona that isn't like anybody else's. As a result, he's played serial killers, doctors, judges and professors, Sigmund Freud, Joe Lieberman, Mark Antony, and the White Rabbit, but always with depth, intelligence and an amazing watchability. He pulls you in. He quietly bends you to his view of a character, always with that genial smile. 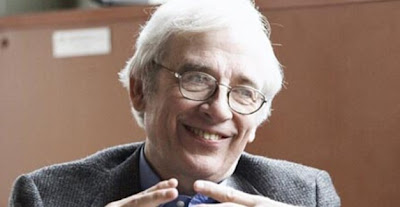 Although he is a graduate of Yale, Austin Pendleton will be offering a chat at ISU this evening, along with Stephen Cone, the writer and director of the film "Black Box," which is being shot on the ISU campus. Pendleton is slated to star in "Black Box," which revolves around "a Midwestern college theatre department," wherein "a graduate student and a group of undergraduates stage an adaptation of an 80s horror novel. Things take a turn when the novel's author pays a visit."

If I had to guess, I would say that Pendleton is playing the author of the horror novel. Or a professor. If you attend this informal chat at an ISU School of Theatre conference room from 5 to 6 pm this evening, you can ask him what role he's taking on this time. You can also ask about Orson Welles, Mike Nichols, Billy Wilder, Barbra Streisand, Robert Altman, Paul Newman, and all the other subjects on which he has fascinating stories to tell. His career is nothing short of extraordinary. He's done everything. If you're looking for a life in the theater, Austin Pendleton stands as a great example of how to be who you are, do what you want, and keep making it work.

For all the information I've got on this appearance by Austin Pendleton and Stephen Cone, click here.
Posted by JulieK at 11:13 AM