I was unabashedly enthusiastic about "The Veri**on Play," Lisa Kron's adorable agitprop piece about striking back against bad customer service, but less so "Death Tax," by Lucas Hnath, the second play on my Humana Festival schedule. 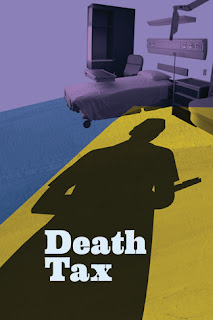 Hnath has written "Death Tax" as a way of looking at the American way of death, as complicated by money. Or maybe it's a way of looking at the American way of money as complicated by death. In any event, his scenario is that a woman named Maxine, who happens to have a lot of money, is lying in a bed in an unremarkable nursing home sometime before Christmas in 2010. She knows that the law on estate taxes is due to change as of January 1, and she believes that her daughter is paying her nurse, Tina, a Haitian immigrant, to kill her in order to get at her full estate before the new law takes effect and also chops off a sizable portion of her inheritance. Tina swears she has no such motives and has not been paid to kill Maxine, but Maxine does not believe her. And that's how the drama begins, with everybody pushing each other around, plotting, counterplotting, lying, telling the truth, maneuvering and using and mocking, with the unspeakably vicious old dragon at the middle of the mess sitting on her golden treasure.

The play may very well be a cautionary tale about advances in medicine that can keep you alive forever, as long as you can pay for it. But it really doesn't stick with that topic, and by the end, it felt more to me like an argument for pulling the plug on patients who've been around too long. I certainly would've agreed to drop the unspeakable Maxine on an ice floe somewhere and wave buh-bye.

It's not that "Death Tax" isn't powerful. It is. But it's also unrelentingly stark in tone, unrelentingly intense in delivery, unrelentingly unpleasant in terms of character and plot. Hnath's dialogue is idiosyncratic, with long monologues for each of its four characters, lots of repetition and circling back to take one more poke at sore spots, that got more and more tiresome for me by the end. I don't think any play can maintain that kind of verbal battering ram for the entire show, although this one certainly tries.

Still, the actors are committed and, yes, intense. Quincy Tyler Bernstine is compelling and more sympathetic than the rest as Nurse Tina, setting up a (mostly) well-meaning woman caught between what she most wants -- to bring her son back from Haiti -- and an evil offer from a demonic old woman. The absence of Nurse Tina, and the off-stage resolution of her plotline, which otherwise carried us through the play, is sorely felt in Scene 5, the last part of the play.

Danielle Skraastad does some very good things with her one scene as Maxine's daughter, showing us the complexity and difficulty in this mother/daughter relationship. And Paul Niebanck, someone we saw last year as a perfect prototype 50s dude in "Maple and Vine," finds his inner weakling as Todd, Tina's supervisor, who harbors a bit of a crush on her and lets himself get tangled in the mess because of that crush.

And then there's Maxine... Judith Michaels is fierce and venomous as as the lady in the bed, the one who simply refuses to die. She spits fire. She shows her claws. And I simply didn't believe that anybody wouldn't have tossed her out a long time ago, whether she has a fortune or not. Or maybe I'm just naive. But I didn't see anything to put me on her side for even a moment. She's the villain. That's it. Yes, I felt sympathy for Nurse Tina, caught up in her plan, and definitely for her daughter, who has suffered plenty, and even a little for her grandson, Charlie, who shows up at the end and may be manipulated, too. But Maxine... She tells a social worker that she knows everyone at the nursing home will have a party when she leaves. Yeah. I totally believe that. And I also believe they would've thrown their party -- and Maxine out on the street -- a long time ago.