In the second of three big theatrical events this week, ISU's Crossroads Project is bringing Opera Créole, a New Orleans based operatic ensemble, to Normal for a lecture and demonstration, a master class and, of course, a full-scale performance. 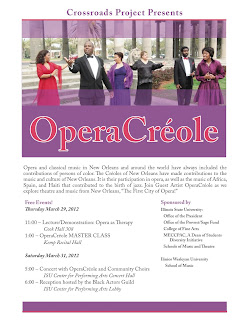 Opera Créole was founded to honor and remember the long history and profound contributions of New Orleans musicians who combined opera with influences from Africa, Spain, and Haiti as they helped create the distinctly American sound of jazz. Or, as their press materials put it:

"Opera and classical music in New Orleans and around the world have always included the contributions of persons of color. The Créoles of New Orleans have made contributions to the music and culture of New Orleans. It is their participation in opera, as well as the music of Africa, Spain, and Haiti that contributed to the birth of jazz. Join Guest Artist Opera Créole as we explore theatre and music from New Orleans, ' The First City of Opera!'"

Their repertoire includes scenes and arias from major operas such as "La Traviata," "Carmen," "Rigoletto," and "Porgy and Bess," as well as arias and art songs by 19th Century New Orleans free composers of color, operatic works by other composers of African descent, and Spanish Zarzuela, which offers scenes that alternate between spoken and sung sequences, with the song portions using both operatic and popular music as well as elements of dance.

Opera Créole's trip to ISU will include an "Opera as therapy" lecture and demonstration on Thursday, March 29th at 11 am in Cook Hall 308, and then later that day, a master class with the artists from Opera Créole at 1 pm in Kemp Recital Hall. Last, on Saturday, March 31, they will offer a performance that includes community choirs in the Center for the Performing Arts Concert Hall from 5 to 6 pm .After the concert, ISU's Black Actors Guild will host a reception in their honor in the CPA lobby.

To make it a complete operatic experience, you may want to attend the Opera Créole concert, stay for the reception, and get a ticket to ISU's performance of "La Bohème" that takes place immediately after.
Posted by JulieK at 10:32 AM