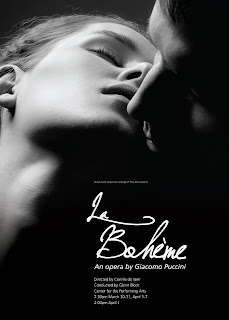 Yes, "La Vie Bohème"is a song in the musical "Rent," and no, "Rent" is not being performed at ISU tomorrow night or any other night as far as I know. But "Rent" is based on "La Bohème," updating Puccini's opera about young, Bohemian artistic types --  a poet, a painter, a singer -- living in Paris in the mid-19th century. Where Puccini dealt with consumption, drugs and sex in "La Bohème," Jonathan Larson commented on AIDS, drugs and sex in "Rent."

Or, as ISU's facebook page for the event puts it: "This 1896 opera in four acts explores the Bohemian milieu of Paris in the 1840s, the love between the sickly seamstress Mimi and the poet Rodolfo, and the timeless question faced by artists everywhere -- should we party or pay the rent?"

Connie de Veer, who did such good work at the helm of "How to Succeed in Business Without Really Trying" last year, takes up directing duties on this "La Bohème." Performances begin tomorrow at the Center for the Performing Arts and run through April 7th.

De Veer's cast includes Andy Hudson and John Ramseyer alternating in the role of Rodolfo, Hyejin Park and Caroline Pircorn alternating as Mimi, Sarah Fallon and Laura Pfeiffer as Musetta, and Robbie Holden as Marcello. Those roles correspond to Roger, Mimi, Maureen and Mark, if you have a thing for "Rent."

And if you do have a thing for "Rent," as so many theater fans did in the late 90s (almost exactly a hundred years after Puccini wrote his opera), you would be well advised to see the original and judge for yourself how the themes of love and loss, illness and deprivation among the underclass, trying to lead a life of art and beauty without selling out, played in 1896.

"La Bohème" is, according to some sources, the fourth-most performed opera in the world. It has survived this long because of the quality of the music, the depth of its characters, and the timeless themes. I have no doubt that Connie de Veer will waltz her "Bohème" in the right direction. The poster alone tells me they will be focusing on the heightened love affairs and romantic complications in the piece, which is, after all, what made everybody swoony over "Rent."