Modern Love Is Messy in the Station's "Becky Shaw"

Gina Gionfriddo is another of the rising playwrights with a "Law & Order" connection. Like Theresa Rebeck, one of the most prominent "Law & Order" playwrights, Gionfriddo has also seen her work performed at Actors Theatre of Louisville as part of its Humana Festival of New American Plays.

Gionfriddo's "After Ashley," about a father and son dealing with the fall-out (and the spotlight) that comes after a terrible crime rips apart their family, was a big hit at the 2004 Humana Festival, making Gionfriddo a finalist for the Steinberg/ATCA New Play Award and the John Gassner Memorial Playwriting Award.

After "After Ashley," Gionfriddo made a splash with "Becky Shaw," her second Humana play, in 2008. "Becky Shaw" also got a New York run after its Louisville success, with the lovely Annie Parisse (who has a Law & Order connection of her own) in the title role, and the play made Gionfriddo a finalist for the Pulitzer Prize. . 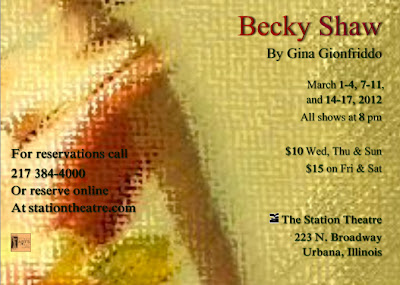 Given that the play is about flawed people in pursuit of love, strained finances, social classes and dubious parenting, the title of "Becky Shaw"  definitely conjures up Becky Sharp (conniving social climber) in Thackeray's "Vanity Fair," with perhaps a little George Bernard Shaw (dryly funny social commentary on the mating game amidst the upper classes) on the side.

Gionfriddo's script is pointed and funny at some turns, murky and a little scary at others, as her plot veers off in unexpected directions and her characters continue to reveal layers we don't necessarily expect. In Kay Bohannon Holley's production for Urbana's Station Theatre, I was especially taken with the blind date scene, after newlyweds Suzanna and Andrew, still in the blissful in-love-with-love stage, fix up her adopted brother, Max, with Andrew's new co-worker, Becky, in what is instantly clear was a very bad idea.

Max is a dark and cynical financial planner who loves nothing more than verbally eviscerating his companions. He depends on his wit and intelligence, as well as the fact that he grew up in Suzanna's patrician Southern household to give him a patina of class, to put others in their place. And his blind date, Becky... Is no match for that at all. She is awkward, a little odd, poor, and working as an office temp. She doesn't have a car. She doesn't have a cell phone. She doesn't know how to dress or what to say or what other people's jokes mean. Becky is just plain wrong.

But Max takes her out, anyway, and they are mugged, setting into motion a series of increasingly complicated events. If at first it seemed that Max could eat Becky for lunch, well, Becky has some weapons of her own. Plus there's the small fact that Max is kind of in love (or as in love as it's possible for him to be) with his adopted sister, Suzanna; that Suzanna's mother, Susan, is difficult and cantankerous, too; that Andrew's savior fixation is also less than healthy; and that Becky's black hole of neediness may just be a big ol' con game. Oops.

Holley's staging gives this "Becky Shaw" a sense of urgency and crisp pace, with good interaction and conflict among all five characters. As Suzanna, the somewhat flighty woman in the middle of all the various relationship combinations and permutations, Lindsey Gates Markel never loses sight of her character's through line, pulling us along as well. Mike Prosise matches her well as Andrew, the teddy bear who just wants everyone to be happy, with Joi Hoffsommer adding an amusingly acerbic note as Susan, the fading aristocrat who keeps a boy toy but won't talk about money over dinner.

If Suzanna is the center of the play's universe, Max and Becky are massive solar flares sending heat and sparks all over everybody else. They're both mercurial, manipulative and verbal, in very different ways, and Mathew Green and Martha A. Mills negotiate that difficult terrain nicely.

Jadon Peck's scenic design is also a big asset to the production, with one higher level stage right for hotel rooms and a series of living rooms center stage on the floor. The triangular backdrops (rotated to change the scene from a small apartment to a crummy place and then a posh home) are particularly effective. The "soundtrack" compiled for the show is also spot-on for modern-day romance angst; it's apparently invited so many comments that the folks at the Station have shared the playlist at Rdio and Spotify.

I can't say I fully understand what Gionfriddo was trying to say with "Becky Shaw," but it is definitely a play you'll be talking about after you see it, as you try to puzzle out for yourself who the real villain is, who's lying when, who feels what about whom and why, and which relationships are worth saving. Very intriguing stuff.

The Celebration Company at the Station Theatre

For reservation information, click here.
Posted by JulieK at 2:21 PM