The Perfect Match: "Purple Rose of Cairo" and the Big Screen

Any movie that begins and ends with Fred Astaire singing is likely to be a hit with me. "The Purple Rose of Cairo," Woody Allen's 1985 ode to the power of movies, does begin and end with Fred, but it has a lot more to recommend it than just that. 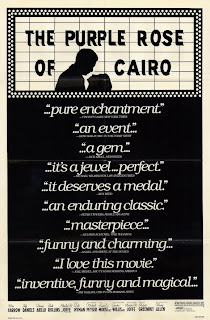 Like this year's Oscar contenders "The Artist" and "Hugo," "The Purple Rose of Cairo" looks at the fantasy world of the movies and how it overlaps, sometimes awkwardly, with real life, as well as what it means to sit in an audience in the dark and fall in love with what's on screen.
Because they're about the fantasy, none of those three really hangs it hat on reality, but there are some very real, poignant moments in "The Purple Rose of Cairo." It's also the only one that departs from the more traditional Hollywood Happy Ending. When questioned about that ending, Allen has supposedly said the one he used in the film is the happy ending, and I can see that. If his point is that we lose our troubles and find a measure of happiness at the movies, the fact that Mia Farrow's Cecelia (fun fact: that name, from the Latin, means "blind") is back in her seat at the end, once again safely watching the big screen, is a happy ending of sorts.

Farrow's Cecelia is a small-town waitress during the Depression when the movie begins, a not-very-good waitress who drops dishes a lot and pays more attention to the love lives of her favorite screen stars than to the customers. Every chance she gets, she goes to the local movie show, looking for glamor, sophistication, romance and escape. Gil Shepherd, played by the perfectly clean-cut, boyishly handsome Jeff Daniels, appears as a supporting player in "The Purple Rose of Cairo," the new movie Cecelia goes to see. Gil is playing the role of Tom Baxter, a Michigan boy in a pith helmet who explores foreign ports, experiences the high life in New York, and falls in love with a swanky nightclub chanteuse. But after Cecelia sits through one showing after another of "Purple Rose," a strange thing happens. Tom Baxter looks right at her, talks to her, and walks off the screen to be with her. Tom Baxter. Not Gil Shepherd, the actor. Tom Baxter, the character in the movie.

Once he's jumped out of the movie, the other characters are stuck. They can't finish their story without Tom Baxter. But he's dashed off with Cecelia to experience the real world and won't come back!

Pretty soon, the movie brass and the real Gil Shepherd arrive to try to figure out how to deal with the dilemma, and Cecelia is caught not just between her husband, a lout played by Danny Aiello, and fictional Tom in his jaunty jodhpurs, but between Gil and Tom, as well.

Allen and cinematographer Gordon Willis contrasted the elegant black and white of the "Purple Rose" movie-within-the-movie with faded reds and browns to characterize Depression-era New Jersey, setting the mood and giving the movie a soft-focus look that works very well.

But it's Mia Farrow and Jeff Daniels who really shine. Farrow makes downtrodden Cecelia sweet and sympathetic, even if she has clearly settled for too little in her life, and beautifully shows how taken she is with the fantasy world that opens up for her so unexpectedly. You can read the doubt and vulnerability, the surprise and delight, on her face as she chooses between real and fantasy, between the world of fake money and fake champagne and the world of real possibilities that inevitably come with real pain. She pairs nicely with Daniels, who creates two compelling characters in naive Tom Baxter and slicker Gil Shepherd, Hollywood star.

Allen's central theme, of how we relate to the movies, how we sink into fantasy life to make the rigors of real life palatable, is fascinating, with just the right mix of comedy and drama to showcase that theme.

"The Purple Rose of Cairo" comes to the Normal Theater tomorrow and Friday, where the vintage movie-going experience should make the movie come that much more alive.
Posted by JulieK at 1:20 PM