Tonight in Louisville at the Humana Festival of New American Plays, the American Theatre Critics Association New Plays Chairman William Hirschman announced that the winner of this year's Steinberg/ATCA New Play Award is Yussef El Guindi's "Pilgrims Musa and Sheri in the New World," which premiered at the ACT Repertory in Seattle. 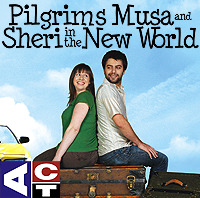 The ATCA describes "Pilgrims Musa and Sheri in the New World" as "a gentle romantic comedy wrapped around a serious examination of issues facing immigrants today, much as they did in the past. An Egyptian immigrant who drives a cab strikes up a romance with a quirky American-born waitress, but the clash of cultures is only the hook El Guindi uses to explore the diversity of opinions even within ethnic groups in the struggle for assimilation and belief in the American dream."

El Guindi was born in Egypt, but spent much of his life in London before moving to Seattle, where he is now based. He received a BA from American University in Cairo and an MFA in playwriting at Carnegie-Mellon. His plays have been produced in theaters everywhere from Durham, North Carolina, to Anchorage, Alaska, and he has acted as resident playwright at Silk Road Theatre in Chicago. He was the recipient of the ATCA's Elizabeth Osborn Award for emerging playwrights in 2009.

In addition to the main award, two other citations for noteworthy new plays were also handed out. Those two winners, who received plaques and checks for $7,500 from the Steinberg Foundation, were:

A. Rey Pamatmat for "Edith Can Shoot Things and Hit Them," which premiered at the Actors Theatre of Louisville during the 2011 Humana Festival. Pamatmat's play is a sweet, touching look at an unusual family composed of three children on their own. Edith, her brother Kenny, and Kenny's budding boyfriend Benji are three nice kids doing their best to stay in control in a parentless world.

Ken LaZebik's "On the Spectrum," which premiered at Minneapolis's Mixed Blood Theatre last November. "On the Spectrum" is a love story about two people who land in different places on the autism spectrum. He has Asperger's Syndrome but "passes" in society. She is proud of her autism and proclaims it's a difference, not a disorder. "Their love story reveals the contradictions between desire for acceptance and for achievement," says the ATCA press release.

When presenting the awards, Hirshman said, "Despite vanishing government support and faltering donations, America's regional theaters have persevered and prevailed as this country's preeminent crucible for vibrant and important new works. This year's submitted plays encompass a dizzying range of styles and themes, produced by a cadre of experienced and novice playwrights who are inarguable proof that theater remains a vital and relevant art form in the 21st century."
Posted by JulieK at 10:22 PM