I don't know about going out like a lamb, but March is definitely coming in like a lion in terms of local entertainment. It's unusual to have so much happening on the very first day of the month, but that's the way it is for March, 2012.

If you want to go out tonight, you have a choice of great holdovers, promising new stuff, Oscar-winning movies, or a touch of legit* March Madness. First up, what's opening tonight... 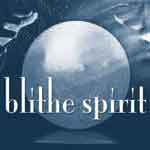 Noël Coward's "Blithe Spirit" begins its run at Community Players tonight with a 7:30 Pay-What-You-Can preview. "Blithe Spirit" is, to my mind, Coward's best play, brimming with the wit and droll humor Coward is known for. Its plot involves British novelist Charles Condomine, who is married to a sensible woman named Ruth. But when Charles and Ruth host an unfortunate seance with eccentric Madame Arcati, they accidentally conjure up the spirit of Charles' blithe, beautiful, infuriating first wife, Elvira, who isn't too keen on leaving now that she's back. Uh oh. Now Charles is caught between two wives, one ghostly and the other very much alive and not very happy to be supplanted by an invisible rival.

"Blithe Spirit" is directed by Tom Smith for Community Players, with a cast that includes Thom Rakestraw as Charles, Hannah Kerns and Gayle Hess as his wife, past and present, and Judy Stroh as Madame Arcati. Performances continue through March 17.

Also opening tonight is the Station Theatre's production of Gina Gionfriddo's "Becky Shaw," a tart little comedy of its own. "Becky Shaw," whose title references Becky Sharp, the amoral antiheroine and best part of Thackeray's "Vanity Fair,"was a hit at the 2008 Humana Festival and enjoyed subsequent New York and regional productions. It begins with a terrible, terrible, terrible first date, a fix-up, played off against the pair of dewy-eyed newlyweds who fixed them up, commenting on love, romance, sex and sexual ethics in the modern world.

The acerbic humor of "Becky Shaw" is its strength, and it should do very well at the Station under the able direction of Kay Bohannon Holley, with Lindsey Gates Markel, Mathew Green, Mike Prosise, Martha Mills and Joi Hoffsommer in the cast. "Becky Shaw" opens tonight at 8, playing till the 17th.

Meanwhile, you have two other do-not-miss theatrical choices that are finishing up this weekend. People continue to discuss the problem of female playwrights not getting enough productions, but here in Bloomington-Normal, we have four more performances of Theresa Rebeck's snappy, dark and jaded "Mauritius," about sisters and shady wheeler-dealers battling over a valuable stamp collection, at Heartland Theatre, and three more performances of Caryl Churchill's sprightly but provocative gender-bent comedy "Cloud 9" at ISU's Westhoff theatre..

The women playwrights celebration continues at Illinois Wesleyan University, with April de Angelis's "Playhouse Creatures" taking a bow on March 6 in the E. Melba Kirkpatrick Laboratory Theatre. Christopher Connelly directs this bawdy look at English theater in the 17th century, when women were first allowed to trod the boards (instead of men playing all the roles) and Nell Gwynn went from Orange Girl to theatrical star. IWU's box office page says there are only three performances March 6-8, which means you'll need to be quick on your feet if you want to see this one.

The Normal Theater offers a mini Woody Allen Film Fest with two of his best, "The Purple Rose of Cairo" and "Annie Hall" playing on the big, beautiful screen March 15-16 and 17-18, respectively. 'The Purple Rose of Cairo" stars Mia Farrow as an unhappy wife who loves to lose herself in movies, and Jeff Daniels as the pith-helmeted leading man who leaps off the screen into her life, while "Annie Hall" is the quintessential Allen romantic comedy, about a man very much like Woody who falls for a woman very much like Diane Keaton, and all the sweet, bittersweet and humorous quirks in their relationship.

On screen, the movie that just swept the Best Picture, Best Director and Best Actor awards at the Oscars, "The Artist" is available right now in Champaign at The Art Theater, where they promise us that they have the only "beautiful 35mm print" in town. If you miss it there but want the vintage movie theater experience, you can try to catch it at the Normal Theater March 29-31. That was unconfirmed as of today, but the Normal Theater invites you to keep an eye on their Facebook page for details as the time gets closer.

New Route Theatre gears up for 2012 with its first "One Shot Deal," a reprise of "The Mystical Willie Lynch," Gregory Hicks' poetic exploration of the lasting repercussions of slavery on African-American history, on March 21 at the Eaton Gallery.

Over in Champaign, Parkland College's production of "Pinkalicious, the Musical," directed by J.W. Morrissette, continues through March 10, the University of Illinois opera program opens Rossini's "The Barber of Seville" tonight in Krannert Center's Tryon Festival Theatre, and the Champaign-Urbana Theatre Company (CUTC) will offer the rollicking musical comedy, "The Producers," directed by Mikel Matthews, beginning March 15. 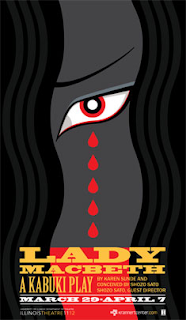 Late in the month, Shozo Sato returns to U of I with his production of "Lady Macbeth: A Kabuki Play," conceived by Sato and written by Karen Sunde. The U of I Department of Theatre says that this take on Shakespeare "retells the Scottish Play from the power-driven perspective of the would-be queen." Further, "[w]ith this evocative production, the Department of Theatre joins the National Theatre Conference’s Initiative to Celebrate American Women Playwrights."

Good for you, U of I. And thank you, ISU, IWU, Heartland, and the Celebration Company at the Station Theatre, for doing your part, as well. I doubt that most of them are focusing on female playwrights on purpose, but even a happy coincidence is to be celebrated.

*Legit March Madness refers to high school basketball in Illinois, where the term "March Madness" was coined. I will tell you all about how that happened someday. For right now, suffice it to say that if I say "March Madness," I mean Illinois and I mean high school. This one's for you, H.V. Porter!
Posted by JulieK at 12:20 PM