Today was my travel day to the Humana Festival of New American Plays at the Actors Theatre of Louisville. We were up at the crack of dawn (maybe before the crack of dawn) to drive to Louisville in time for our first play, Lisa Kron's "The Veri**on Play." 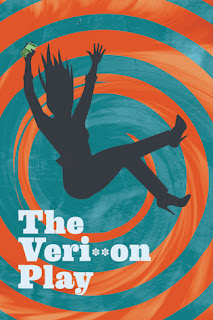 The word with the ** in it is obviously Verizon, as in the phone company. Er, telecommunications empire. Giant? Conglomerate? I don't know if the asterisks are there to indicate swearing directed at Verizon or because she thinks she might have legal troubles if she puts their corporate name in her title. Whatever the reason, the target is definitely Verizon, all because the customer service people there made the mistake of ticking off a playwright. In dramaturg Amy Wegener's notes accompanying the play, she says that Kron herself had a run-in with the phone company, one that ended up as "one of those Kafkaesque experiences one has that goes on for many months," in Kron's words. She continues, "I was in a state of apoplectic rage, and found myself screaming at this poor customer service person: 'I'm going to write a play about this!'"

Although the rep on the other hand didn't laugh out loud or anything, it seems likely he or she was not impressed with the threat of theater.

But Kron persevered, writing her "primal scream" of a play as a smart, hilarious trip down a rabbit hole of unseen enemies, empty promises, frustration, crazy people, more crazy people, and a whole lot of romping around. Kron targets technology in general in what she calls a combination of "my love of theatrical craft, my devotion to cheap laughs, and my interest in the alchemy that occurs between stage and audience and lifts us into that delicious 'we're all in this together' feeling."

Well, Lisa Kron, I can honestly say: Mission Accomplished. From beginning to end, I found "The Veri**on Play" funny and entertaining, with all kinds of amusing theatrical tricks, all employed in the best wiseacre tradition. In performance, with a terrific cast that switched roles (and kept fooling me into thinking I was seeing new actors), the play came off creative, surprising, and just plain adorable. "The Veri**on Play" was a great way to kick off my Humana weekend.

Kron herself plays the lead role, one Jenni Jensen, who makes one tiny mistake in which box she checks while paying a bill on-line. After that, the amount she already paid keeps showing up on her bill month after month, no matter how many blithely indifferent customer service people she speaks to. Then the phone calls threatening to turn off her service begin. She hooks up with what she thinks is a support group for people like her, those treated badly by customer service, only to find out they're really an underground Up With People/Down With Faceless Drones and Corporations kind of movement.

Director Nicholas Martin has staged it all in the brightest, most cheerfully ridiculous way possible, with lots of sharp blackouts and changes to new locales, with one quick trip around the world near the end just to show that German and French money machines are just as negative as American ones. Kron's script goes increasingly off the deep end, and Martin navigates those waters beautifully.

I also really loved the costumes from designer Kristopher Castle, showing us an array of hipster doofus pieces put together in bizarre combos, and the fun, fizzy music contributed by sound designer Benjamin Marcum to carry us from one scene to another and from composer Jeanine Tesori, who has created a big honking anthem to urge us all to take a stand and rise up against bad customer service.

If it sounds like a soapbox, trust me when I say it's too funny for that. And too adorable.

Kron's charming presence and comic timing set the mood for the show, with excellent help from the clever, hard-working actors in the ensemble (including Carolyn Baeumler, Joel Van Liew, Kimberly Hebert-Gregory, Ching Valdes-Aran and Clayton Dean Smith). Calvin Smith and Hannah Bos deserve special mention for being absolutely unrecognizable as different characters, and Bos and her sparkly beret and lightning quick changes (as well as her inexplicable Russian accent when she plays a paranoid cigarette-smoking underground activist named Ingrid) are as funny as it gets all the way through.

I haven't got a clue if any other company can pull off the bravura (and fairly shameless) comedy act that is "The Veri**on Play," but I'd sure like to see it if they try.

Trivia note for ISU fans: Alum Sabrina Conti is a member of the Humana Festival Apprentice Company this year, and she appears in the ensemble of this show.

THE VERI**ON PLAY
By Lisa Kron