"The Comedy of Errors," Direct From Britain's National Theatre

As part of the National Theatre Live project, where British stage productions are filmed and then screened across the UK as well as in the US, Champaign's Art Theater will be showing "The Comedy of Errors" at 1 pm on Sunday the 18th. 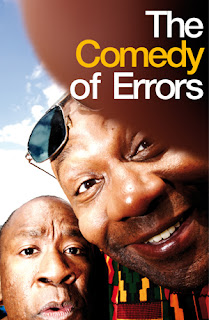 This "Comedy of Errors" stars British comedian Lenny Henry, whom the Daily Mail called "sublime" and The Independent called "wonderfully funny" in his role as Antipholas of Syracuse, who has a twin, also named Antitpholas, who lives in Ephesus. The two Antipholi were separated as babies in one of Shakespeare's patented storms at sea/shipwreck dealios. The Antipholi have twin servants, both named Dromio, and they keep getting mistaken for each other in Ephesus, where people from Syracuse are expressly forbidden. There's comedic danger, marital discord, long-lost brothers and mothers and fathers, and even a harlot to spice up the story.

For the National Theatre, Dominic Cooke directed this modern-day take on "The Comedy of Errors" where the two Dromios wear identical shirts advertising the Arsenal Football Club and Claudie Blakley, who plays the wife of Antipholas of Ephesus, totters around in sky-high red stilettos. The Independent also references "a six-foot-five transsexual in PVC miniskirt" as part of the Ephesus landscape. The Antipholus and Dromio from Syracuse sport Nigerian accents to establish their outsider patina, while the other pair sound more like London.

Thank you to the Art for continuing to offer these Nation Theatre "programmes." They aren't cheap (tickets were $15 the last time I went to one) but they certainly are worth it. Straight from the stages of Great Britain to Champaign-Urbana! What a deal!

The Art doesn't have its schedule up that far ahead, but the next show in the National Theatre Live set will be "She Stoops to Conquer," featuring Sophie Thompson in the cast.