It's that time again! Last year I did a preview piece on the state qualifiers in the drama half of the IHSA's Drama and Group Interpretation competition taking place at Sangamon Auditorium at the University of Illinois-Springfield. Hard to believe it's already been a year since Burbank Reavis High School won the top prize with their lovely and haunting production of Melanie Marnich's "These Shining Lives." Excellent acting, design and direction led Reavis to a state championship last year. Will they repeat, or will someone new emerge to take the title this year? 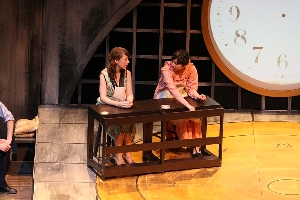 Here you can see a glimpse of Reavis's play, showing just how good these student productions can be, even though they are required to tote their set and scenery to Springfield in a small truck, load it all into an assigned space at the auditorium, and then put it up and strike it in a very limited amount of time. The plays are also restricted by time, which actually worked out well for Reavis, since time was a major theme in "These Shining Lives," a play about women making radium-dial watches in the 1920s. You can see the corner of the big clock projected on stage next to the actresses in the picture above.

Reavis is back this year, along with last years' #2, Oak Lawn Community, #3, Belleville West, #4, Benton, #5, Rock Island, #6, Thornton, and #8, Fremd. In other words, it's going to be a tough competition, with perennial contenders again lining up to claim the prize.

Defending champ Reavis qualified by taking 2nd place at their own sectional with a production of Martin McDonagh's searing "The Beauty Queen of Leenane," a 1996 Irish play about a selfish, destructive mother and the fragile daughter trying to escape her. "Beauty Queen" is directed by Erika Banick and Tom Witting, who directed "These Shining Lives" as well as "Equus," which earned them the top prize in 2007.

If they hope to win again this year, they'll have to get past Oak Lawn Community and their "Picnic," the 1953 William Inge play about two sisters getting ready for their small town Labor Day celebration and the handsome stranger who stirs things up with his arrival. Oak Lawn's "Picnic" finished 1st at the Reavis sectional last Saturday. Directors are Billy Denton, Theresa Wantiez and Marcus Wargin. Denton and Wargin were also on board in 2010 with "The Miracle Worker" and 2006 with "The Taming of the Shrew," winning state championships and showing they are quite comfortable with classic material.

Last year's 3rd and 4th place teams, Belleville West and Benton, have advanced from the Charleston sectional. Belleville West did well with Beth Henley's "Crimes of the Heart" last year, and this time, directors John Lodle and Laurie Bielong bring David Auburn's "Proof," the winner of the 2000 Pulitzer Prize, to Springfield. "Proof" is about the daughter of a brilliant but mentally ill math genius coming to grips with her father's two legacies, math prowess and insanity. An interesting bit of trivia: Reavis performed "Proof" in 2009, coming in 7th, while West took "The Beauty Queen of Leenane," Reavis's choice this year, to a 7th place finish in 2006. Turnabout is fair play, apparently. Or the Reavis and Belleville West coaches are attracted to the same kind of material

Benton and director Allan Kimball finished in 4th place last year with "The Ballad Hunter," and they'll try to better that this year with "Feeding the Moonfish," Barbara Wiechmann's 1998 one-act about a lonely cook and waitress who spend an evening together, sitting on a dock in a Florida swamp. "Moonfish" is an unusual piece that should be anything but "same old/same old" to the judges.

Emerging from the Harvey Thornton sectional are Homewood-Flossmoor and "The Dream of the Burning Boy," a 2011 play by David West Reed about the death of a high school student and the aftereffects on his teachers, family and fellow students, and Thornton Township and Javon Johnson's "Papa's Blues," a 1999 play about three generations of fathers and sons dealing with hopes, dreams and disappointments.

Homewood-Flossmoor is one of the most stellar programs in IHSA drama history, with (if I've counted correctly) 17 championships since 1967. More recently, they won five in a row from 1998 to 2002, with "A Fair Country," "The Cripple of Inishmaan," "The Misanthrope," "Uncle Vanya" and "Othello." Director J.R. Rose was co-director on "Doubt," which placed 4th in 2010.  'The Dream of the Burning Boy" is a fresh piece of material and its high school setting should make it perfect for this kind of competition, meaning Homewood-Flossmoor may once again rise to the top.

John Steinbeck's 1937 play, "Of Mice and Men," as performed by Glenbrook North High School, finished first in the Palatine Fremd sectional, beating out home team Fremd's production of "Hail Mary!" The latter is a 1995 comedy from Tom Dudzick of "Over the Tavern fame," and quite a departure from Fremd's "Kindertransport," a drama about Jewish children and the Nazis, which finished 8th last year.

"Of Mice and Men" is directed by Julie Ann Robinson and Tom Monaghan; Robinson co-directed "Good Boys and True" with Pat Murphy, earning a 2nd place finish in 2010. "Of Mice and Men" has been seen at state before, with Oak Lawn Richards taking 3rd place with it in 2009, and Benton and Waubonsie Valley finishing in 5th and 6th, both performing "Of Mice and Men" in 2000. Glenbrook North is no stranger to the state competition, either, earning championships in 1996 ("Oleanna") and 1994 ("The Elephant Man") as well as in 1962, 1964 and 1965.

The plot of "Hail Mary!" pits a plucky novice nun against a more traditional Mother Superior, with Judy Klingner, Mike Karasch, Lauren Dennhardt and Josh Cattero directing. If it wins, it will be the first comedy since Dudzick's "Over the Tavern" from Thornton Fractional South in 2003.

The Rock Island sectional was won by Sterling High School with Ira Levin's clever 1978 mystery "Deathtrap," where an established playwright desperate for a new hit decides to steal from -- and bump off -- the bright new kid. "Deathtrap" is directed by Chuck and Jill Price, bringing Sterling back to the state tournament for the first time since 2006's "Last Chance Texaco," which finished 9th.

In 2nd place at Rock Island was the Rocks' own "Agnes of God," the 1982 John Pielmeier play about a novice with stigmata and a mysterious pregnancy. The Rocks are once again led by Rino C. Della Vedova, who directed last year's 5th place "Hospice" and won it all in 2009 with "The Elephant Man."

The state schedule is rounded out by the top two plays from the Rochelle Lake Park sectional, with Lake Park's "Wit" and West Chicago's "Much Ado About Nothing" finishing 1-2.

Margaret Edson's "Wit," about a woman dying of cancer who tries to make connections in the time she has left, has been performed at state before; a Normal Community production finished 3rd in 2000.

Lake Park High School returns to state after a 4th place finish in 2009 with "The Diviners," and state titles in 1980 ("I Never Sang for My Father"), 1987 ("To Gillian on Her 37th Birthday") and 1992 ("Dancing at Lughnasa").  Sara Keith, who directs "Wit" and co-directed "The Diviners," is carrying on the family tradition set by her late father Michael Dice, who directed both "Never Sang" and "Gillian," and co-directed "Lughnasa" for Lake Park.

Our last qualifier, West Chicago, is the lone newcomer in the bunch. That's right -- West Chicago High School is the only one of the 12 schools appearing at state this year who has never made it before. They'll break the ice with "Much Ado About Nothing," the Shakespeare comedy wherein Beatrice and Benedick engage in a romantic battle of wits. Mark Begovich directs "Much Ado" for West Chicago.

IHSA administrator Susie Knoblauch, who is in charge of state Drama and Group Interpretation, has just posted the complete schedule for performances on the IHSA site if you are interested in coming to Springfield to see a few plays. The panel of five judges who will choose the state champ will see all 12 of them, making for a long day Friday and an early day Saturday.
Posted by JulieK at 12:32 PM