Add April de Angelis's name to the list of female playwrights currently getting productions in this area, with Illinois Wesleyan's production of de Angelis's "Playhouse Creatures" showing exactly why it's important to highlight women's work. 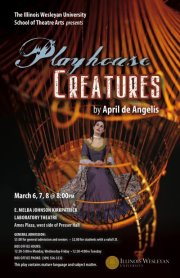 "Playhouse Creatures" deals with a topic that every actress ought to find fascinating. The play is set in the 1660s, after Charles II had been restored to the throne of England, after he'd reopened the theaters the Puritans had shut down, and after he'd made it legal for theatrical companies to employ women on the stage. No more boys playing girls' roles! No more male Juliets and Lady Macbeths hiding under wigs and rouge!

For girls like Nell Gwyn, born into a life where selling oysters on the street or hawking oranges in the theater stalls was the best she could hope for, life upon the wicked stage was a definite step up. Using her beauty, wit and charm, Gwyn parlayed herself into a career as England's most celebrated comic actress of the Restoration period, a side life as the King's mistress, and a pension, a house and a title for her son (who was also the King's son). She also died at 37, probably from complications from syphilis.

In "Playhouse Creatures," de Angelis's fictionalized versions of Nell and her colleagues Elizabeth Farley, Mary Betterton and Beck Marshall all come up hard against the dark side of their progress. Their career gives them money and prestige, at least for a while, but they're still dancing to other people's tunes, still at the mercy of their powerful lovers' desires, the whims of the theater company owner, and the vicissitudes of age and illness and bad luck.

It's not just women in theater we're seeing here, it's women in general, in what you might call a No Win Situation. Just as in the play, women may be told the only way to get ahead is to use their looks and sexuality. But if they do, they're whores. If they don't, they're uptight, humorless whores. If they use contraceptives, they're double whores. And if they get pregnant... Triple whores!

De Angelis's non-linear, somewhat floaty script creates indelible characters and a compelling situation, as well as a bit of humor in the early going. Director Christopher Connelly and his cast do an excellent job filling out the characters, aided by Aaron O'Neill's wide, theatrical scenic design, and a beautiful (if asphyxiating, at least in terms of the corsets) array of lingerie and gowns from costume designers Celeste V. Kelley and Mariah Williamson.

Among the cast, Annie Simpson stands out as the very picture of youthful exuberance and optimism as a bright-eyed, rosy-cheeked Nell Gwyn, with Allison Sutton also quite wonderful as Mrs. Betterton, showing all the affectations of an older diva who has figured out how to cock her head like a clock to demonstrate different emotions.

Lizzie Rainville takes on the challenges of ill-fated Elizabeth Farley's ups and downs with good skill, while Laura Williams looks lovely and gives spirit to Beck Marshall, laid low because she tries to retaliate against a villainous suitor. Abigail Dryden is stone-cold and scary as a Janie-Come-Lately in their theatrical world.

As Doll, Kirsten Andersen gets the unenviable role of being the old lady who cleans up after everybody else, as well as a sort of narrator, but she goes for it, shining especially on her speech late in the play where she talks about the bears who used to be tortured to make them dance in this very place.

There are only two men on stage in a turnabout of sorts, with Antonio Gracias and Ian Scarlato doing a) hapless and b) nasty quite nicely.

The only downside to this production of "Playhouse Creatures" is that there are only three total performances, and opening night was sold out, with a Standing Room Only crowd. If you can get in, you really ought to try.

Remaining performances: March 7 and 8 at 8 pm

For reservation information, click here.
Posted by JulieK at 3:51 PM