There were a whole lot of special celebrations and tributes planned for Stephen Sondheim's 80th birthday in 2010, continuing on through at least March 9, 2012, when Sondheim was given the UK Critics' Circle 2011 Award for Distinguished Services to the Arts.

Whether they were specifically intended to honor Sondheim's 80th, 81st or 82nd birthdays or it's just a general sense of celebration, we've seen "Sondheim: the Birthday Concert" at the New York Philharmonic, telecast on PBS and available on DVD; the musical "Sondheim on Sondheim," with a cast album available at PS Classics; "Sondheim 80," a concert at the Roundabout; another celebration at New York City Center; a British birthday concert during the BBC Proms; the New York Pops offering yet another tribute concert at Carnegie Hall; the publication of "Finishing the Hat" and "Look, I Made a Hat," two volumes written by the man himself discussing his lyrics and his general philosophy on songwriting; a New York Philharmonic concert version of "Company" that was filmed and screened all over the US; a "Follies" on Broadway (cast recording also available at PS Classics) and another one in Chicago; an outdoors "Into the Woods" built into a tree in Regent's Park; a City Center Encores! version of "Merrily We Roll Along," and, of course, lots and lots and lots of productions of other Sondheim shows all over the place. 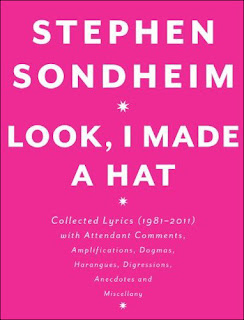 I'm totally in favor of keeping this party going if it means I keep getting concerts and shows and cast recordings and book and posters to entertain me. I'm also willing to adopt Sondheim's birthday as my own if it will match up better to when Sondheim stuff is made available and I have gift list privileges.

In any event, if you haven't brought your own collection up to date, you have time to do that. But don't wait too long. Because (and I realize I have totally buried the lead here) The Guardian in England has announced that Sondheim is working on a new show. No, I'm not kidding. His last show was Wise Guys/Bounce/Road Show, which went through many different versions, casts and plot byways, never did quite gel as far as most critics are concerned, and is discussed at length in "Look, I Made a Hat." But this new show... The Guardian reports that Sondheim said he had 20 to 30 minutes of material written and that he is working with playwright David Ives ("All in the Timing," "Venus in Fur") on the book. And here's the really intriguing quote: "It's an idea I've had for a long time and it springs indirectly from a moment in a play of David's." Trotsky with a hatchet embedded in his head? Spinoza on trial? A cross-dressing painter or businessman?

We'll have to wait and see, but it's certainly intriguing. And I hope he has more than half an hour of material by now.
Posted by JulieK at 10:58 PM

Email ThisBlogThis!Share to TwitterShare to FacebookShare to Pinterest
Labels: Company, David Ives, Follies, Into the Woods, Look I Made a Hat, Merrily We Roll Along, Stephen Sondheim