Temperatures Rising: "Picnic" at ISU May Heat Up Your Spring

ISU's Department of Theatre has four shows opening in the next two weeks, with the first, William Inge's "Picnic," as directed by Lori Adams, taking the stage at Centennial West 207 on Thursday night. 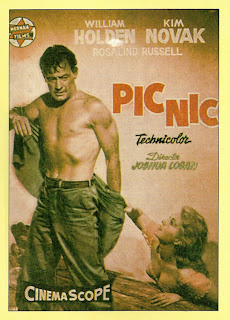 As you may recall, "Picnic" just won the Illinois High School Drama competition for Oak Lawn Community High School last weekend. The play was a major hit in 1953, winning a Tony for director Joshua Logan and earning a Pulitzer Prize for Inge. It also introduced Paul Newman to Broadway (but not in the lead, although he eventually did replace Ralph Meeker in that role) with his future wife Joanne Woodward attached  to the play as an understudy. The script was also turned into a fine movie in 1955, again directed by Joshua Logan, starring William Holden as sexy bad boy Hal, the guy who blows into town and turns everyone's world upside-down, with Kim Novak playing sweet and vulnerable as his romantic partner, Madge. The film version won two Oscars and was nominated for four more. (Because I can't resist an image of William Holden without his shirt on, I am giving you a look at the movie poster here.)

And in case you're keeping track, there was a Broadway revival in 1994 with Kyle Chandler of "Friday Night Lights" fame and Ashley Judd in the lead roles.

Although it isn't revived all that often, "Picnic" is a definite classic, all about two sisters, the aforementioned Madge and her tomboy sis, Millie, who live in a small town in Kansas. They squabble a bit with each other, and they are strictly controlled by their single mother, but both are yearning to breathe free and make their own decisions. And then Hal shows up next door, sweaty, hot, the kind of boy no girl can resist... Also in the mix are Rosemary, the schoolteacher who boards in their home, who pretends to be the very model of respectability even as she's desperate to snag a man; Mrs. Potts, their neighbor, who hires Hal to do some work around her house; Alan, Hal's friend from school; and Rosemary's beau, Howard, who goes along to get along most of the time.

For ISU, Eliza Morris, who starred in "Drowning Ophelia," will play Madge, with Russell Krantz, who last appeared in "Electra," opposite her as Hal. Betsy Diller has been cast as little sister Millie, Melanie Camire as the girls' mother, Flo, and Elizabeth Keach as Rosemary, the major pot-stirrer. Mitch Conti will appear as Alan and Devon Nimerfroh takes on Howard.

Director Lori Adams recently won an award from the St. Louis Post-Dispatch for her directing efforts on the play "Falling," so she comes into "Picnic" on a roll. It will be very interesting to see what Adams does with the play in the intimate confines of the Centennial West Studio Theater.

"Picnic" opens with a 7:30 pm performance on Thursday the 29th, followed by shows March 30-April 1 and April 3-7. For ticket information, visit the production's Facebook page here, read this press release, or click here for their productions page. Because the venue is quite small, you would be wise to get your tickets ahead of time.
Posted by JulieK at 12:59 PM