Celebrating the 4th (Cool, Inside and Safe)

It's too darn hot. (And, no, no one around here is offering "Kiss Me Kate" to tell us that musically.) 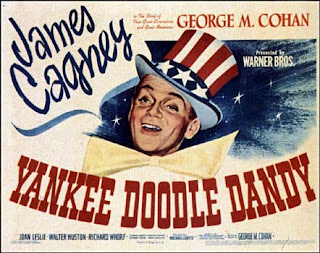 We're in a record heatwave, like much of the country, with dire warning that setting off firecrackers may start a fire or sitting outside in the sun to watch a parade may give you heatstroke. By the time the cities around here are starting their own, more closely safeguarded fireworks, safely out of the sun, it will have gone all the way down to.... 92 degrees.

If you prefer your 4th of July entertainment without the risk of sun or heat, yes, movie theaters are open today, and probably doing a land-office business. That means you can watch the All-American "Abraham Lincoln: Vampire Hunter" or "The Amazing Spider-Man," or the quirky, but very American-in-its-own-way "Moonrise Kingdom" if that's how you want to celebrate.

If even a movie (or the trek to get there) puts you too much in the sun, your television has some excellent choices, too. Of course there are parades and concerts all over the dial, and HBO is airing its "John Adams" miniseries (the one with Paul Giamatti and Laura Linney as Second President John and Second First Lady Abigail) starting at 10 am, while Syfy has a marathon of "The Twilight Zone" that started at 8 am and runs till 5 am tomorrow. I don't recall any presidents or parades in "The Twilight Zone," but it is a distinctly American phenomenon, frequently commenting on concepts like community, isolation, individual freedom, prejudice, tolerance and war. Rod Serling hit the Civil War, Custer's Last Stand, World War II, and various versions of Mars as he looked at what makes us alike and different, what makes us human, and sometimes what makes us inhuman. Now Syfy just needs to get "Once Upon a Time," the Buster Keaton episode, and "A Quality of Mercy," where Dean Stockwell suddenly sees himself switch to the Japanese side during World War II in the Pacific.

But my recommendation for the best way to celebrate the 4th is to switch on over to Turner Classic Movies and look at their schedule of Independence Day programming. There's John Ford's "Drums Along the Mohawk," with Henry Fonda and Claudette Colbert settling the wilds of New York state, the musical "1776," where John Adams, Thomas Jefferson and Benjamin Franklin sing their way through the writing of the Declaration of Independence, and then "Yankee Doodle Dandy," the one where tough guy James Cagney shows off his idiosyncratic stiff-legged dancing moves as George M. Cohan, the song-and-dance man who was born on the 4th of July.

"Yankee Doodle Dandy" is not only a Cagney/Cohan showcase, it's a look at the past life of American pop music, Broadway, vaudeville, and patriotism through song. The movie was made in the middle of World War II, in 1942, so of course it wears its red-white-and-blue heart on its sleeve. There's even a visit from FDR.

Cohan certainly had a larger-than-life personality, just like Cagney, and that energy and enthusiasm, that joie de vivre, is in every inch of this flag-waving movie.

"Yankee Doodle Dandy" airs on TCM tonight at 7 o'clock Central.
Posted by JulieK at 10:22 AM