This Weekend It's All About Abe

How many Lincolns can you handle? There will be at least four live and in person this weekend, as Bloomington celebrates its 4th annual Lincoln's Festival (AKA Lincoln's Bloomington Fest & Civil War Days) with events in and around downtown Bloomington, the McLean County Museum of History, the David Davis Mansion, Burr House, the Bloomington Public Library, the BCPA, Franklin Park and the Illinois Wesleyan University Quad. 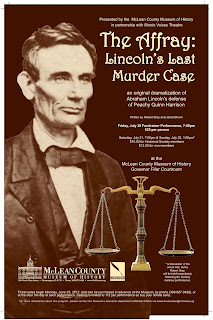 The four Lincolns I'm counting are John Bowen, playing Abe during his lawyer days in "The Affray," a production of Illinois Voices Theater performed at the courthouse inside the McLean County Museum of History; Max Daniels as President Lincoln, meeting children and overseeing a military ball with Mrs. Lincoln (Donna Daniels) at the David Davis Mansion; Lincoln reenactor Chris Hotz scheduled to appear in Franklin Park with Frederick Douglass (portrayed by Bob Thurmond); and Dick Benach appearing as Abe the family man in a later piece also at Franklin Park.

Plus, of course, there's always the bronze statue on the bench outside the McLean County Museum of History, ready and willingto share a picture with you; and the Lincoln-Fell-Davis statue called "Convergence of Purpose" in Lincoln Park outside the BCPA.

Although "The Affray" opens tonight, the other programs are centered on Saturday and Sunday. They range from Civil War era crafts demonstrations to battle reenactments, a scavenger hunt and a coloring contest for kids, speeches and historical presentations, military maneuvers and demonstrations, music, food, and tours. The Downtown Bloomington Association offers a nice run-down of events here, with a big poster pulling everything together here.

Last I heard, Sunday's performance of 'The Affray" was sold out, and tonight's was getting perilously close. If you want to nab a ticket to the Friday or Saturday shows, you'd better act fast and get a reservation in at the Museum at 309-827-0428. John Bowen takes on the role of Abraham Lincoln as a savvy defense attorney trying his best to get an acquittal for a client accused of murder, with Todd Wineburner as the prosecutor on the other side of the courtroom, Nick McBurney as defendant Peachy Quinn Harrison, and David Flanders, James Keeran and Rhys Lovell among those playing witnesses and personnel at the trial.
Posted by JulieK at 12:58 PM