"The Diary of Anne Frank" is not what you would call normal summer rep fare. The dramatized story of a young girl and her family hiding out from the Nazis during World War II is in turn sweet, sad, funny and tragic, as young Anne grows up a little, writes in her diary, imagines a new world outside the confines of the attic, and always remains the optimistic, curious, clever, insightful girl she was before the horror began. 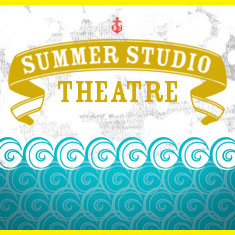 "Anne Frank" stands apart from the usual musicals, comedies and Shakespeare that fill our summers with its examination of that dark period of world history, as well as its contemplative mood and larger cast. When it opens tonight as the last piece in the University of Illinois Summer Studio Theatre, "Anne Frank" will feature a cast of twelve plus one understudy, mixing two local high school students (Dominique Allen and Max Keagle), three current acting students at U of I (Mark E. Fox, Naomi Mark and Nick Narcissi), two recent grads from U of I (Ethan Gardner and Luke Grimes), three adult actors with connections to the Station Theatre (Sarah Heier, Carolyn Kodes-Atkinson and Lincoln Machula), one Chicago actress (Karen Vaccaro) and one PhD candidate in theater history from U of I (Zachary Ross).

That means there is enough of a range for age-appropriate casting and some interesting interplay among actors with different levels of experience. 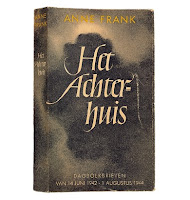 "The Diary of Anne Frank" as a play is based on the real diaries of a real Dutch Jewish girl, recording her experiences under the Nazi occupation from 1942 to 1944. Her diaries were published in book form after the war, in the German edition you see at left, and then in English in 1952.

Authors Frances Goodrich and Albert Hackett adapted the book into a play for a Broadway production in 1955 featuring Susan Strassberg as Anne; it won the Pulitzer Prize for Drama that year, as well as the Tony Award for Best Play.

Playwright Wendy Kesselman created a new adaptation in 1997, and it's that second "Anne Frank" that opens tonight at Krannert Center for the Performing Arts under the direction of Lisa Gaye Dixon. The Kesselman take on the Goodrich-Hackett play came to Broadway in December 97, directed by James Lapine, with a then-16-year-old Natalie Portman as Anne and Linda Lavin as Mrs. Van Daan.