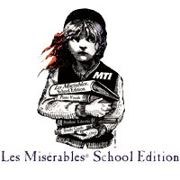 This year's show put on by Normal Parks and Recreation Summer Music Theatre started two weeks ago, and last week, they even canceled a show due to the extreme heat.

But the good news is that the heat has lifted a little and there is one weekend's worth of performances left to see "Les Misérables," the School Edition, at the Connie Link Ampitheatre, which is adjacent to the Normal Parks and Rec office near the Constitution Trail. That office is located at 611 N. Linden, and parking is available there, in the lot at Linden and Underwood Park.

So... "Les Miz," the School Edition. It is mostly the same as the regular "Les Miz," with the same characters and themes at the forefront, with just a few verses and short bits cut here and there to make it about half an hour shorter.

"Les Miz," the musical, features music by Claude-Michel Schönberg, with original French lyrics by Alain Boublil and Jean-Marc Natel, and the English version of the lyrics reworked and created by Herbert Kretzmer. Schönberg and Boublil wrote the book for the show, with director Trevor Nunn and director/playwright John Caird adapting it for the first London production.

The musical is based on the 19th century French novel by Victor Hugo, about a man named Jean Valjean who steals a loaf of bread and thereby sends himself into a whirlpool of injustice, fate and free will, crime and punishment, rebellion and redemption. Although many people assume it's about the French Revolution, it is, in fact, set some years after that one, focusing on the years 1815 (just after Napoleon) to 1832, when Paris students attempted an uprising against the ruling elite.

Ryan Groves from Normal Community West appears as Marius, the idealistic student who is the object of both Eponine's and Cosette's affections, while Monsieur and Madame Thenardier, the comic thieves who keep popping up to steal the silver, are portrayed by Ramsey Hendricks and Mackenzie Buob, both from Bloomington High School.

The rest of the ensemble includes 68 high school and junior high students (if I counted right), all working hard to create the world of early 19th century Paris.

For this student production of "Les Miz," tickets are $4 for adults and $2 for students. Because this is outdoor theater with seating on the grass, you are reminded to bring your own lawn chairs or blanket. The remaining performances are July 12, 13, 14 and 15, with all shows at 7:30 pm.

The Normal Parks and Rec Summer Music Theatre Facebook page is here if you need more information.
Posted by JulieK at 10:53 AM