"New Plays from the Heartland" Take the Stage This Week

Heartland Theatre’s annual one-act play competition, “New Plays from the Heartland,” begins this week, with an open forum with playwright/adjudicator Douglas Post on Thursday night and then performances of the winning plays on Friday and Saturday.

The 2012 edition of “New Plays from the Heartland” began its process way back in 2011, with Heartland’s panel of experts (including Heartland’s Artistic Director, Mike Dobins, and local theater practitioners, writers and artists) choosing a theme for the year’s competition. They selected “Summer in the Heartland,” asking playwrights from throughout the Midwest to submit their one-act plays that dealt with some aspect of this time of year in the central part of the country.

And once they had the submissions before them, those judges read and analyzed all the “Summer in the Heartland” plays before choosing the best of the best to send to Doug Post, this year’s final judge, to select the winners to be performed this week at Heartland under the direction of Mike Dobbins. 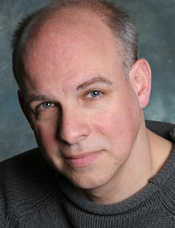 To give the inside scoop on his own playwriting process as well as how he handled choosing the winning plays, Douglas Post (seen at right) will conduct an open forum on Thursday, July 12, at 7:30 pm at the theater. Post is a founding member of the Victory Gardens Playwrights Ensemble in Chicago, plus he teaches at Chicago Dramatists and is the Chicago Regional Representative for the Dramatists Guild. Nationally, his plays have been produced in New York, Chicago and LA, while internationally, he’s had work produced in Austria, Canada, China, England, Germany and Russia. He has also been commissioned to write screenplays for Warner Brothers. and NBC, teleplays for WMAQ-TV, and done several radio adaptations of his scripts. On three occasions, he has been selected to develop his work at the O'Neill National Playwrights Conference and once at the O'Neill National Music Theater Conference. He has received the L. Arnold Weissberger Playwriting Award, the Midwestern Playwrights Festival Award, the Cunningham Commission Award and three Playwriting Fellowship Awards from the Illinois Arts Council, and has been nominated for a Joseph Jefferson Award and an Emmy Award.

Post’s forum is open to the public and free of charge.

If you’d like to see what Doug Post chose and what Midwestern playwrights came up with on the idea “Summer in the Heartland,” you will want to attend the performances of the plays on Friday and Saturday. And if you do, you’ll be seeing these winning playwrights and plays:

Andrew Head (FIREFLIES)
Andrew is originally from Evansville, IN. He relocated to Normal last summer while chasing after the woman he finally married this May. Andrew graduated from Bradley University in 2007 with a degree in Theatre Arts. At BU he dabbled in acting and playwriting, performing in plays like ANGELS IN AMERICA and NIGHT OF THE IGUANA. He was also fortunate enough to have one of his own works, titled BUTCHER: THE PLAY (inspired by Cursive’s The Ugly Organ album) performed at BU. Andrew appeared on Heartland’s stage in February as Dennis in MARITIUS. In the fall, Andrew will begin his MFA in Acting at Michigan State University in East Lansing. Thanks always to Kat, for continually making his work better.

Terri Ryburn (LEMONADE AND LIGHTNING BUGS)
Terri retired from Illinois State University in 2005 and became active in Young at Heartland, the senior theatre troupe associated with Heartland Theatre. She began writing plays for the group and subsequently had published a book of short plays. In addition to acting and writing, she does stand-up comedy and is busy restoring a 1930s Route 66 building in Normal. She thanks the NEW PLAYS FROM THE HEARTLAND sponsors and committee, Ann White, and Mike and Gail Dobbins for their hard work in keeping live theatre relevant and vibrant. She credits her late husband, Bill Sanders, for the inspiration for her most successful plays.

Lori Tate Matthews (FARMERS' MARKET)
This fall marks the world premiere of Lori Matthews’ first full-length play to make it to the professional stage. Barter Theatre, a regional theater in Abingdon, Virginia, will produce OCTOBER, BEFORE I WAS BORN, a script that won the Appalachian Festival of Plays and Playwrights in 2011 and was named as a finalist for the Woodward/Newman Drama Award in 2012. Milwaukee Chamber Theatre has also contracted the play for their 2013/14 season. Lori’s previous work has received readings at Chicago Dramatists, Milwaukee Chamber Theatre and Madison’s Playwrights Ink. Workshop versions of her plays have appeared at the Wisconsin Wrights Festival and The Second City. Lori lives with her husband, Greg, and their two children in Stoughton, Wisconsin.

Andrew Head’s FIREFLIES involves a married couple who are quite sure they belong together. The question is where. Ryan yearns to see new sights and experience new adventures, while Jess prefers her own back yard. Yes, they are crazy about each other. But how do people – even people in love – resolve that kind of gap in hopes and dreams, in distant stars and nearby fireflies?

Instead of romantic love and its complications, Terri Ryburn’s LEMONADE AND LIGHTNING BUGS focuses on a mother and son. They, too, clearly love each other. But he is a practical lawyer who wants her to move forward, move on, face reality. And she just wants things to be the way they were. Progress? It ain’t progress if it means leaving her lemonade and lightning bugs behind.

Rounding out the group of winners is Lori Tate Matthews’ FARMERS’ MARKET, a look at the territorial implications of who goes where and who knows how to be neighborly when it comes to selling their wares. Sandy has manned the same stand for absolute ever, and she gives out advice, conversation and camaraderie along with her corn and cucumbers. But Anika is brand new. And her motives are a lot murkier than Sandy’s. The flowers she displays may be pretty, but Anika spells CONFLICT at the Farmers’ Market.

These three new plays will be presented in staged readings (with some costumes, props and set pieces) at Heartland Theatre on Friday, July 13 and Saturday, July 14, with both performances at 7:30 pm. There is no set ticket price, but you are asked to contribute a $5 donation at the door. For reservations, email boxoffice@heartlandtheatre.org or call 309-452-8709.

The “New Plays from the Heartland” project is funded by The Town of Normal Harmon Arts Grant and sponsored by Paul and Sandra Harmon.