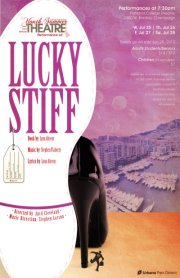 You've probably heard about "Weekend at Bernie's." But what about "Lucky Stiff"?

This delightful musical, the first collaborative effort of composer Stephen Flaherty and lyricist Lynn Ahrens, involves a dead guy getting hauled around for comic effect, just like "Bernie," but pretty much everything else is different. And better.

There is another contender for the six mil, however. And that is the Universal Dog Home of Brooklyn, where sweet, committed Annabel Glick toils on behalf of her furry friends. Annabel decides to follow Harry and his uncle (dressed up and pushed around in a wheelchair) to watch out for the interests of the Dog Home.

Meanwhile, several other nefarious parties, including thieves, gamblers and shady ladies, are shadowing the proceedings, too.

Although there's definitely some dark humor happening, what with the dressed-up corpse and a missing heart, "Lucky Stiff" is really charming and fun, and the songs are quite melodic and easy to love. You can see a synopsis of the show and its numbers here.

This new "Lucky Stiff" is a production of the Urbana Park District, featuring Cameron Cornell as Harry, Erin Cleveland as Annabel, Emma Lloyd as Rita, the near-sighted former lover of Uncle Tony, Kenna Mae Reiss as Rita's brother Vincent, Jonah Herzog as mysterious Luigi, Sarah Vavrin as Dominique du Monaco, a nightclub performer, Andreas Ruiz-Gehrt as the emcee, Caroline Gillette as the lawyer, and Jessica Duchinsky rolling around as the body in the chair. There are also tap dancers, featured dancers, a dog corps, and a large ensemble of background players and chorus.

The show opened last night at the Parkland College Theater. It continues through this weekend, with tickets from $7 for children to $14 for adults. For all the details, visit the "Lucky Stiff" Facebook page here.
Posted by JulieK at 1:59 PM