Magical "Moonrise Kingdom" Creates a World of Its Own 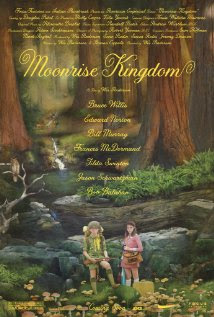 There is such a level of quirkiness, of specific and singular vision, in the films of Wes Anderson, that you can't possibly mistake his work for anyone else's.

From "Bottle Rocket" to "Rushmore" and even the animated "The Fantastic Mr. Fox," his movies have Wes Anderson written all over them, in terms of an ensemble of familiar actors (most often including Jason Schwartzman, Bill Murray, and a Wilson or two...) playing characters who seem slightly off as well as smart and disaffected, a languid pace with lots of long takes, wry humor delivered in a deadpan fashion, lots of reds and yellows and grass greens and turquoise blues soaking up the screen, and the creation of a unique world, his very own, that is not at all the same as the one the rest of us inhabit.

That world is present from the first seconds of "Moonrise Kingdom," the new Anderson film now playing in local theaters, which starts in a bright red house on an imaginary island, the kind of house characters in children's books inevitably live in, right down to the playroom with a window seat, and endless cupboards where the children who live there can hide their treasures. Or hide themselves.

It's 1965, but this is an imaginary 1965, in a world apart, where the idyllic island is going to be wracked with a massive storm in about three days. Our narrator, a puckish Bob Balaban in a bright red coat and a funny green cap, tells us so, from his place somewhere in the near future. 1965's near future, that is. So, maybe 1966. Is he making this story up? Embellishing? Possibly. There is a "local legend" feel to a lot of it, which only adds to the charm.

Suzy (Kara Hayward), the girl who lives in the curious red house, is unhappy. She's a Wes Anderson outsider who has problems with the other children at school and with the rest of her family, which includes Mom (Frances McDormand) and Dad (Bill Murray), a pair of lawyers who don't communicate very well, and three younger brothers who are not at all like her. But Suzy does have a pen pal, a boy who saw her sing in a church program of Benjamin Britten's "Noye's Fludde," an operatic take on Noah's flood, which Wes Anderson has said he himself performed in as a child.

Noah, two-by-two, a flood that tests people's mettle and sense of community, a lone guy being organized and methodical and pushing ahead even when those around him think he's insane... These concepts will be important later, in case you thought that "Noye's Fludde" thing was just a way for Anderson to show off people in funny costumes.

Suzy's pen pal is Sam (Jared Gilman), an orphan as well as a severely square peg at the foster home where he's been relegated. Although he seems to be a good scout (a Khaki Scout, away at camp under the direction of Scout Master Ward, played by Ed Norton), Sam doesn't really fit in with his troop, either. He and Suzy have planned to run away, she from her red house and he from Camp Ivanhoe, with the idea of making a trek by canoe and on foot to a remote inlet where they will pitch a tent, dance to a quirky French record on the record player she borrowed from her little brother, read aloud her favorite fantasy and adventure books, swim, fish, and have a time-out from the real world. They call their new playground Moonrise Kingdom.

Like "Rushmore," "Moonrise Kingdom" centers on kids, which seems to be Anderson's sweet spot.  While the one in "Rushmore" (Jason Schwartzman's Max Fischer) was in high school, the boy and girl in "Moonrise Kingdom" are a bit younger. They're twelve. And they're firmly in that period when life moves more slowly, when being an outsider is particularly painful, when finding a place or even one person who understands you seems both impossible and imperative.

The quirky Wes Anderson tone works perfectly here, as Sam and Suzy display a palpable yearning to belong even while proudly hanging onto their idiosyncrasies, to grow up while hanging onto childhood, as each bit of Benjamin Britten music, set piece (so many tables), costume (his coonskin cap and owlish glasses, the scout uniforms and badges) and prop (the record player, her books and binoculars, his decorated tent and canoe) complement the story and suck you into this particular "Kingdom."

Gilman and Hayward are perfect as Sam and Suzy, as sweet, strange, awkward kids who aren't grown up enough to understand how life works, or why the adults around them are such a mess. Those adults are also just right, from Murray's messy, bruised father figure to Norton's spit-and-polish Scout Master who wants to lead but keeps losing his way, McDormand's flawed wife and mother who carries a megaphone but can't seem to get through to anybody, Jason Schwartzman's wheeler-dealer of an adult scout, and Bruce Willis's lonely, passive cop who has a problem stepping up. Oh, and Balaban's odd little narrator, who looks more like a garden gnome than a cartographer or historian.

"Moonrise Kingdom" ends up lovely and affecting, poignant and charming, and deeply personal to anyone who has ever suffered through being twelve, imaginative and alienated, especially in the 60s. Wes Anderson was born in 1969, so how he understands what 1965 felt like to a child, I don't know. But he certainly does.
Posted by JulieK at 1:00 PM