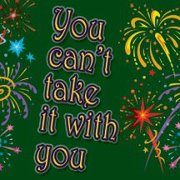 Community Players is holding open auditions tonight and tomorrow night at 7 pm at the theater on Robinhood Lane for its upcoming production of the classic Kaufman and Hart comedy "You Can't Take It With You."

Performances of the play are scheduled for August 30 through September 9.

Suffice it to say that all the Sycamores (with the exception of Alice) are more than a little eccentric. Grandpa doesn't believe in taxes, Dad is making fireworks in the basement, Mom is trying to write a lurid potboiler of a play, Sis is a candy-making ballerina, and Bro-in-Law has a habit of printing whatever strikes his fancy, including seditious broadsides. Their friends and colleagues are even stranger, which leads to comedy when Tony and his stuffy parents pop by to meet their potential in-laws.

"You Can't Take It With You" won the Pulitzer Prize for Drama in 1937, and has continued to be revived successfully in community theaters, high schools, and regional productions ever since. The 1938 film directed by Frank Capra starred Jimmy Stewart and Jean Arthur as Tony and Alice and took home that year's Best Picture and Best Director Oscars, while a 1983 Broadway revival with Jason Robards (as Grandpa) and Colleen Dewhurst (as Olga the Russian duchess) also earned good notices and a Drama Desk nomination for Maureen Anderman, who played Alice.

The play and its message -- that life should be fun -- has never really gone out of style. For more information about Community Players' auditions for "You Can't Take It With You," check out this Facebook page.
Posted by JulieK at 3:28 PM