Will "Damn Yankees" Hit It Out of the Park for Prairie Fire?

Baseball fans in the 50s knew what it was like to despair of anyone other than the Yankees winning the World Series. Sure, the Dodgers sneaked in there a couple of times, but baseball in the 50s was all Mickey Mantle, Whitey Ford, Yogi Berra, Joe DiMaggio, Phil Rizzuto... Damn those Yankees, anyway! 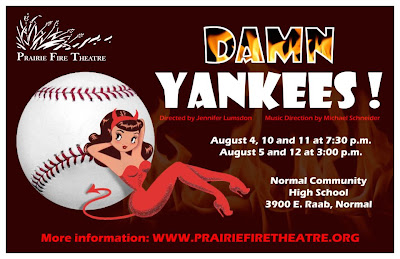 That's why a guy named Douglass Wallop came up with a Faustian hook for his novel, "The Year the Yankees Lost the Pennant," in which a fed-up Washington Senators fan accepts an offer from a devilish smooth talker named Applegate. If middle-aged nebbish Joe Boyd signs on the dotted line, he will immediately transform into Joe Hardy, an amazing young baseball phenom who can single-handedly turn the Senators into winners. Will Joe sell his soul for a winning baseball team? Or will he find a way to use his exit clause and get back to his wife with his soul intact?

The novel came out in 1954, and was quickly turned into a Broadway musical, with old hand George Abbott and Wallop creating the book, and Richard Adler and Jerry Ross writing music and lyrics. Adler and Ross, proteges of Frank Loesser, were fresh off "The Pajama Game," which had won the 1955 Tony Award for Best Musical. Bob Fosse's "Pajama Game" choreography also won a Tony, and he was in place for "Damn Yankees," as well, working with Gwen Verdon, who was cast as Lola, the sexy siren who tries to tempt Joe Boyd and his younger alter ego, Joe Hardy, into sticking with the devil's bargain.

The show has been revived on Broadway only once, in 1994, with Victor Garber as the devil and Bebe Neuwirth as Lola, and Jerry Lewis stepping in as a replacement Applegate in his Broadway debut.

With so much dancing, "Damn Yankees" is a bit of a departure for Prairie Fire Theatre, as they tend to err on the side of Gilbert and Sullivan or musical revues. But their singers ought to be able to sell songs like "Heart" and "Whatever Lola Wants" with ease, making their "Damn Yankees" a good bet for baseball fans and musical fans alike.

"Damn Yankees" opens August 4th, followed by performances on August 5, 10, 11, and 12. Friday and Saturday performances begin at 7:30 pm, with a 3 pm curtain for Sunday matinees.

For all the details, you can visit Prairie Fire's "Damn Yankees" Facebook page, or their website, which now has a reservation option, as well.
Posted by JulieK at 2:50 PM