"White Collar" Is Back, Sans Collar

I've had a weakness for TV shows about con men since "It Takes a Thief" back in 1968. In that era of suave spies and crimefighters, with Men and a Girl from UNCLE, I Spy, Maxwell Smart, Mrs. Peel in her catsuit and stilettos, and the Mission: Impossible force donning new disguises every week, Alexander Mundy (played by Robert Wagner) still stood out. His dashing fashions, devil-may-care attitude, clever heists and nifty cat burglary established him as a perfect romantic antihero for the late 60s. It didn't hurt that my beloved Fred Astaire popped up as his dad, the equally light-fingered Alistair Mundy, every once in awhile. 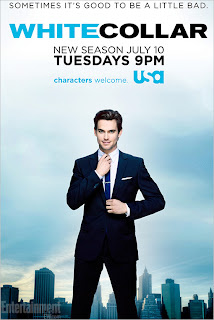 USA Network's "White Collar," which began its 4th season last week, is very much like "It Takes a Thief." No Fred Astaire, of course. And a little more serious in tone. But still... Incredibly handsome thief? Check. Caught by the government and forced to do his thieving for them? Check. Given a by-the-book overseer who becomes his friend? Check.

If anything, Matt Bomer is even better looking than Robert Wagner was in 1968, although it may just be that Wagner's ascots and swoopy hairdo haven't held up well. But Bomer is certainly handsome, and "White Collar" made no bones about capitalizing on that, keeping him half-dressed and emerging from the surf, no collar of any kind to mar the view, in the premiere episode of Season 4.

The production values and plots of "White Collar" are also a lot more sophisticated than "It Takes a Thief," as you would suspect. Plus they've attempted to deepen the characters and give everybody motives for what they do, with lots of mystery about exactly who Bomer's Neal Caffrey is and why he's drawn to this exciting, dangerous life. All good stuff.

At the end of last season, Caffrey had done enough and stayed clean long enough to get out from under the deal he made with the FBI, but then a nasty G-Man played by Beau Bridges pulled a sneaky maneuver to keep him under the Bureau's thumb forever. So Caffrey's handler/friend, Peter Burke (played by Tim DeKay, the Bizarro Jerry from "Seinfeld"), gave him the signal to go on the lam with his best pal, quirky Mozzie (Willie Garson, famous for playing Carrie's friend Stanford on "Sex and the City"), before the Feds and bad, bad Beau Bridges could nab him.

When we took up with Neal to begin Season 4, he and Mozzie were hanging out on an island somewhere. Somewhere without an extradition treaty. Neal was doing his usual gorgeous guy routine, coming onto a pretty local woman, making sand castles of the New York skyline, and handing over money to buy silence as to his presence on the island.

Meanwhile, back in NYC, Peter and his wife (Tiffani Thiessen, best-known for "Saved by the Bell") were scrambling to figure out where Neal was so they could warn him that another hard guy from the FBI was on his trail. Mekhi Phifer ("ER" and "O") plays the new enemy, one Agent Collins.

Things looked dire for Neal at the end of "Wanted," the season premiere episode, with Collins in charge, even though we know that can't last for long. Can it?

This is one show where I'm not sure how they're going to resolve the problems they've set up, and that's all to the good. For a slick suspense show, you have to have some surprises built in. How long will Neal stay on the run? Will Neal end up working for the FBI again, forced to be their in-house thief and work with Collins? How will Peter figure into things since his role in helping Neal escape has been uncovered? Will they both go on the lam, with Mozzie and Tiffani Thiessen in tow, to gather evidence to knock over Beau Bridges and Mekhi Phifer? Or will that all get figured out in Episode 2, "Most Wanted," which airs next Tuesday?

If you missed "Wanted," USA will be showing it again tonight, after the premiere of their new show "Political Animals," which stars Sigourney Weaver as a former first lady. The start time for "White Collar" and its "Wanted" episode is 10:24 pm Central tonight. If you can't get enough of the con-man capers, TNT's "Leverage" comes back tonight, too, with its team of smooth operators taking on another case, "The (Very) Big Bird Job," at 7 pm Central.

And "Most Wanted," that second episode of "White Collar" that should pay off how Neal gets out from under the gun, will be back in the usual Tuesday slot next week, airing at 8 pm on July 17 on the USA Network.